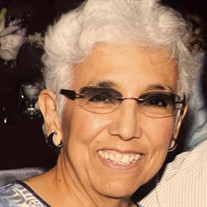 Lovingly referred to as ‘Tía Alicia’ by her large extended family, Alicia Macias was born November 24, 1933 in a small mining town, Miami, Arizona, and passed peacefully in her sleep on August 27, 2021 in Chula Vista (San Diego), CA, at the age of 87. She was the youngest child of six, born to Antonio Macias and Josefina Nuňez de Macias, both natives of Mexico. At the age of four, during the Great Depression and scarcity of jobs, along with thousands of other Mexican families, her parents were repatriated to Mexico with all six U.S. American born children. They settled in Juarez, Chihuahua, Mexico, where she attended through middle school, then leaving school to work in order to economically assist her parents. Much later, determined to complete her high school diploma, she attended Lydia Patterson Institute in El Paso, Texas, and received her high school diploma at 34 years of age in 1967! She was immediately hired as the school’s Secretary to the Principal due to her excellent bilingual skills and work ethic. In 1972, Tia Alicia and her parents moved to San Diego, CA, to be closer to some of her siblings. She secured employment in the financial office of the Laborers’ Union Local 89, and was able to purchase a home for herself and her parents. After nine years, she moved on to work as an Office Assistant for the State/County Department of Mental Health Social Services, where she served for ten years until 1993. Through a county seniors program, she also worked a few years as an elementary school Instructional Assistant as well as for Adult Protective Services. Her possessions include multiple letters of recommendations that attest to her professionalism; work ethic and judgement; dependability; compassion and zest for life! Although TÍa Alicia never married nor had children, her older siblings made her a very young aunt and, therefore, was very close to many of her nephews and nieces, later including their children. She could relate to them, enjoyed joking, singing and dancing with them, and due to her positive attitude about life, they looked up to her for advice throughout the years. TÍa Alicia was also very active in Unity Church of San Diego for many years, volunteering many hours as a Sunday School teacher as well as taking the lead in various church activities. Her faith… and stubbornness, helped her survive health challenges that included heart surgery and even a battle with COVID-19. No wonder her favorite saying, up until the day before she passed, was “Life is Fascinating!” She was preceded in death by her parents (whom she cared for her whole adult life) as well as all five siblings; Luis Macias, Consuelo Mena, Manuel Macias, Antonio Macias, Jr., and Rodolfo Macias. She is survived by innumerable nephews and nieces from both the Macias and the Mena extended family’s that at the very least, reside throughout California, Oregon, Texas, and Tennessee. We would also like to take this opportunity to thank her homecare team from Kaiser Permanente Hospice Care for their compassionate care of our tia, as well as Fredericka Manor. She is missed but will forever be in our hearts. TÍa Alicia will be inurned alongside her sister, Consuelo Mena, at an outdoor graveside service, Greenwood Cemetery, in San Diego, California, on November 22, 2021, at 11:00 a.m.

Lovingly referred to as &#8216;Tía Alicia&#8217; by her large extended family, Alicia Macias was born November 24, 1933 in a small mining town, Miami, Arizona, and passed peacefully in her sleep on August 27, 2021 in Chula Vista (San Diego),... View Obituary & Service Information

The family of Alicia Macias created this Life Tributes page to make it easy to share your memories.

Lovingly referred to as ‘T&#237;a Alicia’ by her large extended family,...

Send flowers to the Macias family.