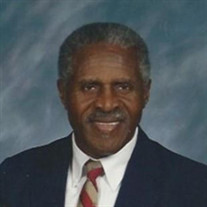 Arthur Jackson Sr. was born on April 12, 1935 in Brosley, Missouri. He was one of five children born to Francis Jackson Sr. and Nellie Lasley. Nellie Lasley passed away at a young age. Francis Jackson would later marry Marie Gladney and she raised them all as if they were her own. At a young age, Arthur learned the value of hard work by working side-by-side with his family by doing chores on their farm. In 1953, the family moved to San Diego, CA. where he continued his education and graduated from Sweetwater High School in National City, CA. Thereafter, he started working at Del Mar racetrack as a cook and assistant handler in the horse stables. Later he also worked as a clothes presser at Foreman and Clarke located in downtown San Diego. He would then join the San Diego Transit as a driver for 31 years. During his career with San Diego Transit, he earned multiple awards which include Perfect Attendance and Operator of the Year. San Diego is where he met the love of his life Shirley Jean Douglas. The two of them became inseparable and in 1961 they were joined in holy matrimony by the esteemed pastor of Calvary Baptist Church, Dr. S.M. Lockridge. Both continued their fellowship at Calvary Baptist Church under the late Rev. W. James Smith and late Dr. Emanuel Whipple Sr. Arthur and Shirley’s relentless love for one another and the passion to create a legacy of spiritual love and strong family values continued for 59 years until his eternal rest. Arthur was a man that understood the value of hard work and dedication to his family and friends. As a husband, he treated his wife as the queen that he knew from day one. As a father, his sense of presence and love provided us a foundation of forever guidance. He made it his life’s mission to ensure each of his kids received a great education and understood the love for family. His extended family and friends knew he was just a phone call away and they could call him for just about anything. He was a man of many trades and could tell you exactly what needed to be done. Not just telling you, but following up to make sure the work was done correctly. He is preceded in death by his two brothers Jay D. Jackson and Johnny Bell Jackson; step-brother Hershel Jackson; step-sisters Toni Jackson and Michelle Archer. Arthur Jackson Sr. leaves to cherish his memory his wife, Shirley Jackson; four children, Gwenda Jackson, Arthur (Yvonne) Jackson, Sharon Cole, and Lerone Jackson; four grandchildren, Drew Cole, Myles Cole, Maya Jackson, and Savannah Jackson; one brother, Francis Jackson Jr. and a host of other relatives and many friends.

The family of Arthur Jackson Sr. created this Life Tributes page to make it easy to share your memories.

Send flowers to the Jackson family.