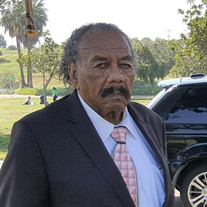 Legacy of Life With great honor, we are celebrating the homegoing of our family patriarch and historian, Austin Eugene Lucious. Austin was born as the first son of Eugene and Ethel Lucious on February 9th, 1926, in Daphne, Alabama. At an early age, Austin professed his faith in Jesus and was baptized; later, during his military years he became a devout Catholic. Austin always stated that he was the "smartest boy in his class" and graduated from Baldwin County Training School at the age of 16. Austin Lucious joined the United States Navy in 1942, where he was expected to be a Steward. However, Austin refused to accept a Steward rating and, after being accused of starting a mutiny, was given a Cook rating. He enjoyed sharing stories on how he served under General Douglas MacArthur during World War II. After separating from the military, Austin attended UCLA, where he acquired his bachelor's degree in Architecture and Structural Engineering. Unfortunately, few architects were Structural Engineers, and other architects would often come to him to do the structural part of their blueprints. Austin became the first black architect in San Diego. He was well known for the houses, churches, hotels, and clinics he designed in San Diego and other cities throughout California. Austin was known for his giving nature. When family and friends had a need, monetary, mentally, or physically, Austin was always there to assist. There was no one that he ever turned down. Austin was preceded in death by parents Eugene and Ethel Lucious; Wife, Rosie Lucious; Children, George Green, Durrell Lucious, Alphonse Lucious, Alfred Lucious, Sharon Settles; Brothers, Alphonse, Willie, Joe, and Aubrey Lucious; Sisters, Leonia Dixon, Ann Lymos, Jeanette Sturkey. Austin Lucious passed peacefully at the age of 95 on Friday, December 17th, 2021, while in the presence of his daughter Michelle Lucious. Austin leaves to cherish his memory his children, Eugene (Jodi) Lucious, Victor Lucious, Ethel Delesbore, Michelle, Emanual, and Lorraine Lucious, Lori Bennett; Sisters, Thelma Russell, Ernestine Davies, Laura Jackson; A host of grandchildren, great-grandchildren, nieces, nephews, cousins, and friends.

Legacy of Life With great honor, we are celebrating the homegoing of our family patriarch and historian, Austin Eugene Lucious. Austin was born as the first son of Eugene and Ethel Lucious on February 9th, 1926, in Daphne, Alabama. At an early... View Obituary & Service Information

The family of Austin Eugene Lucious created this Life Tributes page to make it easy to share your memories.

Legacy of Life
With great honor, we are celebrating the homegoing...

Send flowers to the Lucious family.