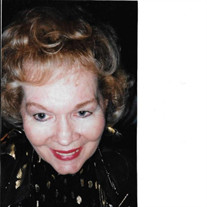 Barbara (Barbie/Barbjune) June King Dougherty, age 89, passed away at home surrounded by loved ones September 14, 2021. She was born March 11, 1932 in Abilene, Texas to Owen King and Blanche (Dollie Wilson) King. She moved as a girl between Texas and California where she finally settled in San Diego, California. She is preceded in death by her beloved husband, Dr. Donald Earl Dougherty who passed in August 2013. She is also preceded in death by her parents Owen and Dollie King, Brothers, Carroll(Babe)King and Jimmy King, sister AnnJo King Miller, grandson Jason Sweenie and granddaughter Elizabeth Chavez. Barbara loved her family. She loved dolls, painting, sketching and making jewelry. She also made clowns when her children were small. Her hands were rarely still. She loved cloths and makeup and always captured all the attention when she entered a room. She was crowned Cactus Princess in High School. She was always complimented on her beauty, though she was never boastful or conceited. She was very shy. She was kind, generous, always standing back for others to shine. Encouraging and a champion for her children and all she loved. For many years Barbara worked as a housewife, dedicating herself to raising her 7 children. It suited her servant heart. She later worked in her Husband's Psychiatric office. Her life was a living example of mettle and fortitude. In dire times, through sickness and health she pushed on trusting to God’s word. “I can do all things through Christ who strengthens me” Philippians 4:13 Barbara is survived by her brother and his wife OG and Pat King and sister-in-law Carolyn King; her seven children and their spouses, Dollie and Joel Cohen, Mark and Cres Chavez, LaRue and Joesph Coffman, Allen and Delora Chavez, Judy and Derek Boyd, Yvette and William Palmer and Michelle and Chris Petersen; fourteen grandchildren, nine great grandchildren, three great great grandchildren, and her many nephews and nieces. All of these she loved and touched deeply. She is in resting in Glory in the hands of our precious Lord. Her work here is done, and she is at peace.

Barbara (Barbie/Barbjune) June King Dougherty, age 89, passed away at home surrounded by loved ones September 14, 2021. She was born March 11, 1932 in Abilene, Texas to Owen King and Blanche (Dollie Wilson) King. She moved as a girl between... View Obituary & Service Information

The family of Barbara June Dougherty created this Life Tributes page to make it easy to share your memories.

Send flowers to the Dougherty family.