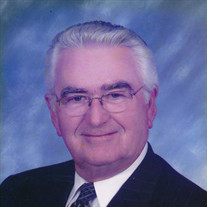 Berl A. Stevenson was born October 7, 1931 in Ellington, Missouri to Truman Stevenson and Lucille Fissel. Both parents were deceased by the time Berl was 3 ½ and he was raised by his maternal grandparents. Berl married Marjorie Sue in St Louis, MO in 1950. He moved to San Diego with his wife and 5 children in 1960. His family attended Revival Tabernacle and he assisted Pastor David F. Gray for two years. Berl then moved on to establish a church in El Cajon, CA. The first service in 1962 was held in the Veterans Hall located on 136 Chambers Street. In 1964 he rented the Fellowship Hall located at 1448 Peach Ave and was able to purchase the property in 1966. This was the beginning of Apostolic Pentecostal Tabernacle. God blessed his ministry and there was great church growth for the next 15 years. The church suffered a major fire in 1978. The fire destroyed the building, but not his vision or passion for ministry. Sue became ill with cancer and passed away in 1984. Berl remarried in 1985 to Dovie Lavelta Sloan. The church continued to flourish and purchased adjoining property in 1986. A Christian school and preschool were established on the church premise and operated for many years. Berl had a passion for all ethnicities and a Spanish-speaking ministry was established in 1990. During the 40 years of pastorship Berl mentored many young men to become pastors and preachers for at least nine churches. Berl was ordained with the United Pentecostal Church International in 1965. He was a Section One District Presbyter for eight years. He served on the UPCI National Curriculum Committee developing Sunday School literature for twenty-five years. Passionate about church growth, he served four years as secretary for the District Home Missions and Director for the District youth Camps for five years. He served on many District and National committees throughout his life. Berl was one of the founders for the Christian Service Training Institute located in San Diego for twenty-five years. This institute provided a solid biblical foundation for the many, many students that went on to serve in various ministries. Pastor Stevenson trained and helped prepare many men and women for ministry local and abroad. Berl enjoyed the outdoors, riding horses in Idaho, hunting deer and duck hunting in the El Centro Valley. He was an avid golfer. Motorhome travel with his wife and traveling with friends created lifetime memories. A favorite motorhome annual trip was going to Moab for rock-climbing and Silverton for offroad-jeeping on the mining trails. Pastor Stevenson’s life calling was a Preacher, Writer, Teacher, Mentor and Pastor. Husband, Father, Grandfather, Great-grandfather and friend. He leaves behind a large family, wife Dovie Lavelta, children Rick, Gary, Mike (deceased), Kevin, Sandy, Venessa, Jeff, 13 grandchildren and 21 great grandchildren. His grandchildren adore him and brought him great joy. Pop will be sorely missed! He was definitely the Patriarch of the family! He loved America, was very patriotic and served in the Naval Reserve. Berl was a life-long fan of the St. Louis Cardinals.

Berl A. Stevenson was born October 7, 1931 in Ellington, Missouri to Truman Stevenson and Lucille Fissel. Both parents were deceased by the time Berl was 3 ½ and he was raised by his maternal grandparents. Berl married Marjorie Sue in St Louis,... View Obituary & Service Information

The family of Berl A. Stevenson created this Life Tributes page to make it easy to share your memories.

Send flowers to the Stevenson family.