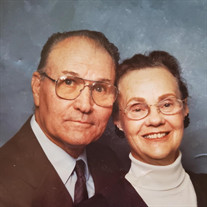 Billie D. Marries was a beloved, father, papa, uncle and friend. Bill lost in a swift battle with colon cancer on April 24, 2022, surrounded by family at the age of 91. Bill was born to James and Maxie Marries in the small railroad town of Dalhart Texas, on June, 01, 1930. As Bill would say, “All Bills are due on the 1st!” Bill graduated from La Jolla High School and could be found most days at the beach, where he met his beautiful wife Jo Ann. Both were avid gymnasts and local legends at the Muscle beach for decades. Bill and Jo Ann married on January 29th, 1952. Bill joined the United States Army, 11th Airborne, and was Honorably Discharged, on January 30th 1954, Fort Campbell Kentucky. Bill and Jo Ann had two boys, whom they loved deeply, Jim and Don. Bill spent the majority of his career working at Pathway Bellows, as a machinist, in El Cajon California. Bill was a legend just about anywhere he worked or played. He was the reigning table tennis champion at Pathway Bellows and was always the first one of the parking lot at the end of his shift. It was always a thrill riding passenger in Bill’s 56 Ford or his motor home for the matter. If it had wheels, he drove it fast. Bill loved entertaining his grandchildren, nieces and nephews in the living room of his home of more than 50 years in Santee California. The home became a touch point for so many as it has always remained the same. Filled with memories of living room boxing matches, feats of strength, plenty of “dad” jokes, gymnastics inside as well as out back on the high bar. Bill was an early riser and could be found reading the paper in the wee hours of most mornings and visiting with his guys at the local donut shop. Bill will forever ne a legend to those who knew him and will be deeply missed,. A private remembrance will be held May 20th, at the Greenwood Memorial. In lieu of flowers please make a donation to your local Boys and Girls Club or YMCA on Bill’s behalf.

Billie D. Marries was a beloved, father, papa, uncle and friend. Bill lost in a swift battle with colon cancer on April 24, 2022, surrounded by family at the age of 91. Bill was born to James and Maxie Marries in the small railroad town of Dalhart... View Obituary & Service Information

The family of Billie D. Marries created this Life Tributes page to make it easy to share your memories.

Send flowers to the Marries family.