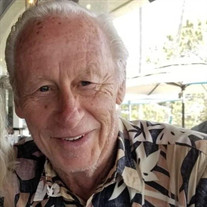 Carl Clifford Lower: 15 April 1942 – 18 November 2021. Born in Holmes County, Ohio, where his family had lived for over a century, Carl and his older brother, Ron, grew up on the family farm outside of Millersburg. His father, Wade Lower, was the town’s dentist/oral surgeon, and his maternal grandfather, Paul Rottman, spoke Pennsylvania Dutch with the Amish families who came to his pharmacy where Carl worked as a boy delivering prescriptions via bicycle. Carl and Ron grew up on “the farm” where their father raised Tennessee Walking Horses on the outskirts of Millersburg. But when their father’s health became challenging, eventually causing Wade to become a paraplegic, the family left the frigid Ohio winters behind and spent half of each year in San Clemente where Wade became involved in politics once he retired from dentistry. He was later elected Mayor of San Clemente during the Nixon Presidency when San Clemente was known as “the Western White House.” Carl and Ron spent their school years half in Ohio and half in California, eventually graduating from San Juan Capistrano “Cappo” High School and attending San Diego State University. At SDSU, Carl met his wife-to-be, Judy Farwell, who graduated from Cappo High the year after Carl. The Lowers and the Farwells were acquainted, but Carl and Judy did not formally meet until SDSU. Carl, a private pilot, as was his brother Ron, took Judy up on her first airplane ride when they were dating. In June 1964, Carl and Judy married at Community Presbyterian Church of San Juan Capistrano, just a year after Ron married Joanne Hansen. After trying his hand at business, Carl started a position at San Diego Gas & Electric where his father-in-law, Dick Farwell, also worked. In the mid-1960s to early 1970s, Carl and Judy had three children. The family settled in El Cajon where Carl and Judy raised kids, dogs, chickens, ducks, and, of course, horses. Carl worked at SDG&E primarily as a planner, attending National University at night and on weekends until he graduated with a degree in Business; he advanced into supervisory positions at SDG&E and then became involved in public utilities at the state level, making many, many trips to Sacramento, San Jose, and San Francisco. After a 33-year career, he “retired” from SDG&E but continued to work as a consultant in the utility industry. Once the kids graduated from high school in the late ‘80s, Carl and Judy relocated from El Cajon to Pacific Beach. An avid runner, Carl completed the America’s Finest City Half-Marathon thirty years in a row, and every single August he cursed that last mile up the ridiculously steep Laurel Street hill into Balboa Park. During Carl’s career, he was involved in Toastmaster’s (he announced for the Mother Goose Parade for many years) and Kiwanis in El Cajon, and, after moving to the coast, he joined the Golden Triangle Rotary Club where he served as President in 2003 and shared his groan-inducing jokes with the captive Rotarians. Carl and Judy traveled across the US and Canada and also visited England, Ireland, France, Italy, and Spain, among other countries. They met many wonderful people and made even more wonderful friends in their travels. In addition to having a “little funky cabin” on Mount Laguna, they settled part-time on Oahu and part-time in Pacific Beach with occasional trips “up the mountain” to celebrate Christmas and Easter with the extended family and friends until Carl’s Alzheimer’s became advanced. Carl’s older brother, Ron, was killed in a small plane collision at Brown Field in November 1971; Carl passed into glory fifty years and two days after his brother. Carl is survived by his beloved wife Judy, his three children, Susanne who lives locally in Alpine, Thomas who lives in Tennessee, and Tracey who lives in Montana, ten grandkids, one great-granddaughter, and his terrible “dad” jokes … which (unfortunately) will never die.

Carl Clifford Lower: 15 April 1942 &#8211; 18 November 2021. Born in Holmes County, Ohio, where his family had lived for over a century, Carl and his older brother, Ron, grew up on the family farm outside of Millersburg. His father, Wade Lower,... View Obituary & Service Information

The family of Carl C. Lower created this Life Tributes page to make it easy to share your memories.

Send flowers to the Lower family.