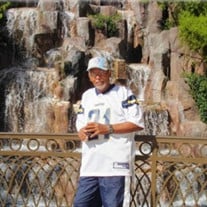 Carl Sanford, age 78 of San Diego, California, went to be with his Heavenly Father on June 25, 2021. Born in Chicago, Illinois on June 1, 1943, Carl born to the Late Isiah Sanford and Late Olivia Sanford. Carl moved to San Diego, California at an early age. He attended and graduated from Lincoln High School and San Diego City College where he ran Track and Field. Carl then attended San Diego State before joining the US Airforce where he fought in the Vietnam War. Carl retired after 30 years of service with US Navy as a Civil Service member. After retiring, Carl went on to start his own Electrical Company “Sanford and Son”. Carl loved fishing, traveling and music and most importantly spending time with his family and close friends. Carl leaves behind his wife of 48 years, Dee Sanford, son Marcuz, daughters Karla and Anita, daughter in law Suzanne and son in law Erin, six grandchildren Michael, Adria, Devon, Ariel, Bryce, Brooklyn, great grandchild Gavin, brother Isaiah and sister in law Debra, three step brothers Charles, Arnie and Theodor and step mother Bonnie Sanford and a host of nieces, nephews and cousins. He is preceded in death by his father Isaiah Sanford Sr., mother Olivia Sanford and brother Fredrick “Ricky” Sanford. A celebration of his life will be held on July 2nd, 2021 at Shelter Island in San Diego, California at 2:30PM.

The family of Carl Sanford created this Life Tributes page to make it easy to share your memories.

Carl Sanford, age 78 of San Diego, California, went to be with...

Send flowers to the Sanford family.