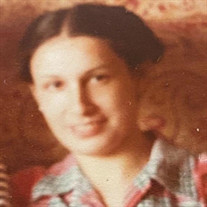 Celebrating the Life of Concepcion Phillips-Moningar Concepcion was born in Tijuana, Mexico on August 28th, 1951 where she lived until she was just a young girl of 8 years old. She then moved to San Diego with her parents- Maria and Trinidad Lopez. She liked to describe herself as- `Daddy’s Little Boxer’ girl, which referred to father’s boxing career. She was one of 13 children. She passed away at Grossmont Hospital on October 1st of 2020. She lived in San Diego County most of her life. She lived in Spring Valley, Sacramento, La Mesa, San Diego, Las Vegas, Barstow and finally El Cajon, where she passed away while living with long- time friend and caretaker Tobey Marsh. She had 7 children although 3 were eventually adopted by a loving family within the San Diego area. She was a home maker for most of her life; however, she completed high school at Mt. Miguel HS. She also attended Southwestern College while she majored in Dance in order to focus on Ballet. My mother had a strong faith in God and always mentioned how lucky she felt to have such healthy and successful children. Naturally, she doted on her grandchildren by helping to provide them with a home and toys, which they will always remember and appreciate. Five words that would describe Connie(as most of her family and friends knew her as) are- Kind, Generous, Misunderstood, Complex and Loving. She enjoyed an eclectic variety of music but thoroughly enjoyed Tom Petty, Blondie and Elton John, among others. She would always say that the most important events in her life were giving birth to her children. She is survived by her sons- Robert Hansel Schirmer, David Bruce Schirmer and Gary Andrew Phillips Jr. In addition, she has 7 grandchildren from her sons, including- Nicole and Amy Schirmer; Trent and Michael Schirmer; and also Leo Alexander, Andrew Markus and Anastasia Mia Phillips. She was preceded in death by her infant daughter Angel Moningar and her two ex-husbands Gary Andrew Phillips and Daniel Moningar. A celebration of her life will be given @ 171 N. Ivory Ave. in El Cajon, CA on November 2nd, 2021. She will be deeply missed by her family and friends.

Celebrating the Life of Concepcion Phillips-Moningar Concepcion was born in Tijuana, Mexico on August 28th, 1951 where she lived until she was just a young girl of 8 years old. She then moved to San Diego with her parents- Maria and Trinidad... View Obituary & Service Information

The family of Concepcion Lopez Moningar created this Life Tributes page to make it easy to share your memories.

Send flowers to the Moningar family.