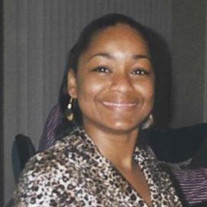 On January 31, 1965 in San Diego, California Robert and Margaret Myers had no idea what a remarkable child they would give birth to and the lives she would deeply touch. Dana Marie Myers was the 10th of 12 children. Dana grew up in San Diego where she attended O’Farrell Junior HS. She developed many lifelong friendships which still remain today. During her high school years, Dana was an honor roll student, she made Homecoming Queen her junior year, and Valedictorian her senior year. In 1983, she graduated from Lincoln High School. On September 13, 1983, Dana brought a beautiful baby girl Davina Wilkerson into the world. While embracing motherhood she took college courses to continue her education. Dana explored the modeling industry while maintaining an occupation at Parkhouse Tires in the administrative field for over 20 years. She was a strong educated mother that enjoyed living life to the fullest. Dana had many hobbies such as: playing cards and dominos, putting together 1000-piece puzzles as well as doing word searches and crosswords. Her mother (Margaret) taught her the card game 5000 and she soon became a challenge to beat. Dana loved music and dancing. Dana brought joy and happiness where ever she went. She often entered and won contests on the radio stations Z90 and 92.5. She eventually was banned from entering more contests because she was always the WINNER! Years later Dana came to the family with exciting news of expecting another child. Completing her family she welcomed her second child, a handsome baby boy, Daveon Davis into the world on February 3, 2002. Dana enjoyed trips to the casino with her family and friends. Of course you can’t forget her faithful yearly VEGAS birthday trips. Dana was very loyal and dependable to her family and friends. She was caring and supportive to all. She was also Santa to everyone no matter what time of the year it was. She was known for finding good deals. Dana was an outgoing person that brought light to everyone and everything she touched. Her “Disposition” was so energizing and heartfelt that it had a way of rubbing off on those around her. She had a laugh that was contagious, when she laughed you laughed! Her last occupation was with the City of San Diego working in the Mayor’s office until she transferred to the department of information specialist. On February 7th, 2022 Dana Marie Myers was called home to the Lord. She was preceded in death by her (Father) Robert C. Myers; (Sisters) Belinda Myers (Cloy) and Roberta Myers (Smith); (Brothers) Robert “Bobby” Myers Jr., Avery Myers, and Michael Myers. She leaves behind to cherish her memories: (Mother) Margaret Ann Myers, (Daughter) Davina Wilkerson-Harris, (Son) Daveon Davis, (Fiancé) Dedric Evans, (Two Brothers) Danny Myers and Robert “Baby” Myers, (Four Sisters) Yvonne Myers, Denise Myers, Danette Myers, and Latashia Myers Cloy-Thompson, and a host of nephews, nieces, cousins and dear friends.

On January 31, 1965 in San Diego, California Robert and Margaret Myers had no idea what a remarkable child they would give birth to and the lives she would deeply touch. Dana Marie Myers was the 10th of 12 children. Dana grew up in San Diego... View Obituary & Service Information

The family of Dana Marie Myers created this Life Tributes page to make it easy to share your memories.

Send flowers to the Myers family.