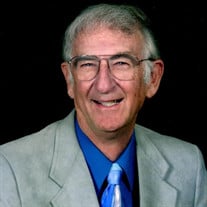 Danny Good went home to be with the Lord on Sunday, Nov 7, 2021. He was born on Sept 5, 1938, in Deming, NM of parents Pete and Louise Good. He was raised on various ranches in New Mexico, because his dad was always a ranch foreman, while his mother cooked for the ranch hands and taught school. Danny was riding horses before he could walk. Growing up, he led a typical ranch life of rounding up cattle, branding them, and mending fences with his dad and doing other jobs required of ranchers. He graduated from Deming HS in 1956. While in HS, he was elected to Boy’s State, Senior Class President, and President of Baptist Student Union. Being a member of 4H and FFA, he raised several grand champion calves receiving 1st place awards at state fairs. His first year of college was spent at Grand Canyon College in Phoenix, AZ. He then transferred to New Mexico Western University in Silver City, NM graduating in 1960 with a major in elementary education. His first job was in Boron, CA near Edwards Air Force Base teaching 6th grade. After a year, he took a job in Escondido and found Dee, the love of his life who taught choral music at Escondido HS. He diligently pursued her until she agreed to marry him, and three months later August 18, 1962, they married. In 1965 they moved to Lakeside, CA where Danny taught for San Diego Unified School District at Central, Marvin, and Foster schools, retiring in 1996 after 36 years in the classroom. Danny and Dee traveled extensively every year. They loved the cultures of other countries. They participated in 22 home exchanges in various parts of the world, and then went with travel groups. He had one brother, Roy Cecil, who passed away at age 47. Danny and Dee have two amazing and successful children; Debra Louise born in 1967 and Dennis Roy born in 1971 and three grandchildren: Chauntel-24, Aleigha-20, and Joshua-17. After retirement, Danny started a highly successful hand-painted silk business called DanDee Silk. He had accounts all over the US. A celebration of life service will be held Saturday, Nov 20 at 1:00 PM at Crossline Community Church, 2705 Via Orange Way, Spring Valley, CA. In lieu of flowers, please donate to your favorite animal charity.

Danny Good went home to be with the Lord on Sunday, Nov 7, 2021. He was born on Sept 5, 1938, in Deming, NM of parents Pete and Louise Good. He was raised on various ranches in New Mexico, because his dad was always a ranch foreman, while his... View Obituary & Service Information

The family of Danny Good created this Life Tributes page to make it easy to share your memories.

Send flowers to the Good family.