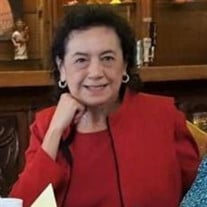 Lowe, Deborah Puentes October 28, 1949 – January 1, 2022 Loving mother, grandmother, friend and beloved educator, Deborah “Debbie” Puentes Lowe was born October 28, 1949, in idyllic San Diego, California. Raised by two 'Salt of the Earth' parents, Betty and Silas Puentes, Debbie and her younger brother Stephen were instilled with great morals and values from a young age and were always encouraged to be fair to others and push for their dreams. Debbie graduated from Hoover High in 1967. A few years later she would attend San Diego State University and earn her degree with an emphasis in education. Soon thereafter, she reconnected with former boyfriend (Gregory Lowe) and they became very active in the United Farm Workers movement lead by Cesar Chavez. Greg and Debbie married in 1976. Throughout their lives, they shared an unshakable passion for social justice and a belief in equal opportunity and increased compensation for migrant workers. Debbie and Greg had their first child, Marisa a year after getting married; their son Ryan followed a few years later. Prior to the arrival of her beloved children, Debbie seamlessly eased into a rewarding, lifelong career in education. She taught for 34 years, teaching for both the Carlsbad and San Diego Unified School districts at Stockton Elementary and Florence Elementary. She then earned her masters’ degree in education and spent the twilight years of her career at Hage Elementary. In addition to her strong rapport with children, Debbie got along well with their parents and her colleagues as well. She was known for her great sense of humor and compassion. In addition to her gifts as an educator, Debbie had a love for cooking and gardening. She was an incredibly intelligent woman who had a passion for keeping up on current events and read voraciously—newspapers, magazines, current fiction, and non-fiction. Her interests and talents also extended into crafting and painting. She was very active in several artist's communities; her work with sketching and watercolor was praised and greatly appreciated by her family members as well as her contemporaries in the artist community. On January 22 of 2021, Debbie received a blessing in the truest sense of the word when her granddaughter, Ava Angelina Driscoll Lowe, was welcomed into the world and into our family. Debbie's countless years of service as an educator to young children made her the perfect role model and vessel of love and compassion in caring for young Ava. While mom's time with us was cut way too short, we will always remember her wonderful heart, her compassion for the underdog, her playful teasing, and never forget her spirit nor the life lessons she taught us over the years. She will never be forgotten. Debbie will be deeply missed by her son, Ryan; daughter Marisa, her son-in-law Pat Driscoll, baby granddaughter, Ava, and her brother Stephen Puentes M.D and his wife, Luisa Puentes-Chong, PhD; her numerous cousins and aunts including Alice Mansfield; Josie Lopez; Mark Double and his wife, Linda; Billy Bareno; Priscilla Lazzara; Bertha Martinez; Augie Bareno; Juanita Thomas; Lydia Phillips and Manuel Puentes, Jr. She will also be missed by her mother-in-law, Lynn Lowe and sister-in-law Claudia Jimenez and her husband Richard. In lieu of flowers, donations can be made in Debbie’s name to Cesar Chavez Service Clubs of San Diego at: https://www.chavezclubs.org/ or to Don Diego VFW Post 7420 in Logan Heights.

The family of Deborah Puentes Lowe created this Life Tributes page to make it easy to share your memories.

Send flowers to the Lowe family.