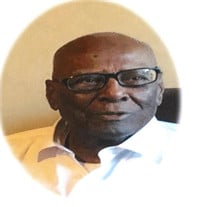 Edmond Wright was born on August 15, 1923 to Walter Wright, Sr. and Almenteen Jacob Wright in Marksville Louisiana. Walter and Almenteen had 11 children, nine of who preceded Edmond in death. Elma Wright (Williams), Ollie Wright, Leroy Wright, Jaecinia Wright (Lewis, Harvey Wright, Walter Wright Jr., Ida Wright (Williams) Daniel Wright and one adopted son, George Slaughter, and Carrie Walton. Edmond united with the church at an early age. His first wife, Grace Virginia preceded him in death. They raised three children, Miriam, Betty, and Carol. Edmond was always extremely proud that he and his daughters lived on the same street for over 60 years; there were many fond memories of great fun and family times. Mr. Wright, as he was affectionately called, was a Master Chief in the US Navy, and served as a supervisor of janitors. Edmond retired from the Military and later, as a State worker from the Department of General Services. He enjoyed a wonderful retired life. During his second phase of life and after being widowed for over 8 years, he married Hazel. They were the perfect couple to share their elder years together. They had many wonderful memories traveling to Louisiana to visit relatives and friends. Hazel, a God-loving woman who took great care of Edmond, preceded him in death in 2018. He never really recovered from the second loss of his two loving wives. Edmond, affectionately referred to as “Mr. Wright” will be remembered for his love of family, his commitment to responsibility, training his family to be respectful, polite, and true to their word and for his love of God. Miriam Davis who preceded her dad in death Edmond Wright is survived by his 2-daughters, Betty Wade, and Carol Jeffries; his two son-in-laws who treated him like a dad, Michael Wade and Dwight Jeffries. His grandchildren: Matthew Williams (Shayla) Michael Williams, Joshua Wade (Madeline), Jessica Baenre (Mikiiyell), and Ashley Jeffries; His Great grandchildren, Janea Williams and Caleb Wade. His sister Dorothy Walton, who called him every week to check on him, and a host of nieces, nephews, and cousins.

The family of Edmond Wright created this Life Tributes page to make it easy to share your memories.

Send flowers to the Wright family.