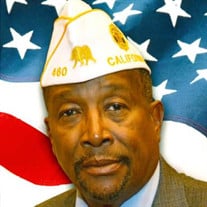 Edward "Ed" J. Grimsley passed away peacefully on October 4, 2021, at 72. Ed was born and raised in Dothan, Alabama, and was the youngest of five children. He was a graduate of Newville Rosenwald High School and enlisted in the United States Marine Corps in 1969. Ed served as a Combat Engineer and later served as an Administrative Chief before his retirement in 1990. In 1985 Ed met and fell in love with Annette, and they were married at Marine Corps Base, Camp Pendleton, California, on May 20, 1989, and had one son Brandon. After his retirement, Ed worked for Marine Corps Community Services in Okinawa, Japan. There, he continued his passion for caring for our nation's warriors. He managed a premium, cost-effective menu of programs and services designed to meet the needs and improve the quality of life for our Marines, Sailors, Airmen, and their families serving away from home. Ed also served in the Disbursing Office, Camp Butler, Marine Corps Base, Okinawa, Japan. After returning to San Diego in 1999, Ed worked for the United States Navy as an Education Specialist, responsible for managing, administering, and monitoring the career advancement of all Navy enlisted personnel in and around the Naval Submarine Base, Point Loma. Ed retired a second time in 2016, after 18 years of civil service. Ed was a kind, fun-loving gentleman who loved to help others, so he always made sure to find the time to be very active during his 21 years in The American Legion. Ed served as the Commander of American Legion Post 310 in San Diego, Commander of San Diego County District 22, Department Vice Commander, Alternate National Executive Committeeman, and Commander for The American Legion Department of California from 2019 to 2021. He loved the American Legion and was passionate about mentoring others to become more active in supporting and serving this great organization. In addition, Ed was a great husband, father, grandfather, and friend who loved cooking and feeding his fellow veterans and anyone who enjoyed his cuisine. Ed will be missed and forever remembered through the great legacy he has left behind. In addition to his wife, Annette Grimsley (USMC Retired Chief Warrant Officer and Legionnaire), Ed is survived by his four sons, Roger, Derrick & Brandon Grimsley, Randy Sewell; sister, Mary Grimsley, Daughter-in-law, Kenya Sewell, Sisters-in-law, Denise Weaver, Ruth and Rhonda Grimsley, Brother-in-law, Michael Weaver, grandchildren, Xavier and Gabrielle Sewell, and Madison Grimsley and a host of aunts, uncles, nieces, nephews, and close family friends.

Edward "Ed" J. Grimsley passed away peacefully on October 4, 2021, at 72. Ed was born and raised in Dothan, Alabama, and was the youngest of five children. He was a graduate of Newville Rosenwald High School and enlisted in the United States... View Obituary & Service Information

The family of Edward J. Grimsley created this Life Tributes page to make it easy to share your memories.

Send flowers to the Grimsley family.