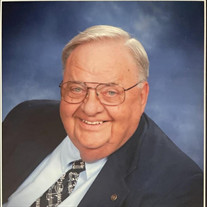 Edward E. Kennedy – October 12, 1933 – September 5, 2021 Edward Earl Kennedy was born to Mary Ann (Riley) Kennedy and Edward R. Kennedy on October 12, 1933, in and around Stover, Missouri. After an extended illness he passed away on September 5, 2021, at Sharp Grossmont Hospital in La Mesa, California at the age of 87. He was a former educator and owned Ed Kennedy’s Tax Service for several decades. He also served as Choir Director of Guardian Angels Catholic Church for 30 plus years. Edward leaves to cherish his memory, his wife of 62 years, Linda C. Kennedy (nee’ Fink), his two daughters, Carolynne Kennedy and Kerry Kennedy of Santee, California and his two grandchildren, Kelsie Peterson and Erik Peterson. He is also survived by his brother Martin Kennedy, and sister-in-law, Marilyn Jean Fink. He also leaves behind his nieces, Nancy Windsor, Kelly Grunden, Leann Hager and nephew, David Hanson. He was preceded in death by his parents, his nephew Andrew Kennedy, II, two brothers-in-law, Wendell Hanson, and James Fink and two sisters-in-law, Jeane Hanson, and Penny Kennedy. Edward Kennedy’s Funeral Mass will be celebrated by Fr. Andre Ramos at Guardian Angels Catholic Church in Santee California at 10:00 am on October 15, 2021. A light luncheon will follow. After the luncheon, he will be inured at Greenwood Memorial Park and Mortuary in San Diego, California. In lieu of flowers, memorials can be given to Guardian Angels Catholic Church or The Wounded Warrior Project.

The family of Edward Earl Kennedy created this Life Tributes page to make it easy to share your memories.

Send flowers to the Kennedy family.