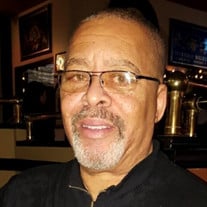 Edward Duane Stephens, the beloved son of Ed and Elsie Stephens, was born on December 31, 1952, in San Diego, California. He was the youngest of six children born to this union. Duane was raised in a Christian home with loving parents who helped to make him become a respectful and kind-hearted man. Duane was a lifetime resident of San Diego, California and received his formal education at Chollas Elementary, Horton Elementary, Gompers Middle School and Lincoln High School where he graduated in 1972. While attending high school, Duane played on the school football team as a defensive back. He was a smooth and clever football player with exceptional athletic abilities. After high school, Duane continued his education at San Diego City College and continued to play football. Duane was a warm loving individual who was highly altruistic. He volunteered at Meals on Wheels for several years delivering meals to senior citizens. His charming personality and attractiveness made him an amicable person, and he touched many people’s lives. He loved to spend quality time with his family and friends. He had numerous friends and a large family, and they all loved him dearly. Duane was a car enthusiast, as he took great pride in caring for his vehicles. He owned a 911 Porsche and a LS 400 Lexus and both vehicles were kept immaculate, shining and beautiful. Duane loved music, mainly jazz and R & B, and he loved live concerts. He loved playing cards, watching movies and traveling. He valued life and wanted to live life to its fullest Duane was united in holy matrimony with his high school sweetheart, Debra Jackson, in 1976. They were a loving and happily married couple for 40 years. They had a special kind of love for each other that is unparalleled to any other. During their marriage, Duane, with a loving heart, took in Debra’s siblings Bridgette and Trinell. He helped raise them and was that father-figure they were missing in their lives. In 2011, Debra, his loving wife, unexpectedly became ill and was called home to be with the Lord. Duane started his working career with Nassco as a welder. He later began a new career with 7-Up Corporation as a truck driver and distributor. After working for 7-Up for several years, he changed employers and started working with Mothers Cookies. He started as a driver and was promoted to Area Manager. Years later he retired. Later, Duane met Sonja Richardson who became his girlfriend and a very special person in his life. Sonja was a blessing to Duane as she brought lots of joy and love to him which helped heal his broken heart. Over the years, as their relationship grew, they affectionately referred to each other as “my guy” and “my girl”. After a long and hard struggle to recover from a heart attack, Duane passed on Friday, January 7, 2022. He was preceded in death by his wife, Debra Stephens, parents, Ed and Elsie Stephens and sister, Eddie Rae Bradford. He leaves to cherish his precious memory his sisters; Narva Osborne, Janet Lowery-Pickens (Arthur); brothers, Stanley Stephens (Carmel), Paul Stephens; brothers-in-law, Wilford Patterson, Trinell Brashear; sisters-in-law, Janice Byrd-Hill, Kathy Jackson, Doris Brashear, Bridgette Brashear; girlfriend, Sonja Richardson; and a host of nieces, nephews, cousins and other relatives and friends who will miss him dearly.

Edward Duane Stephens, the beloved son of Ed and Elsie Stephens, was born on December 31, 1952, in San Diego, California. He was the youngest of six children born to this union. Duane was raised in a Christian home with loving parents who helped... View Obituary & Service Information

The family of Edward Dwayne Stephens created this Life Tributes page to make it easy to share your memories.

Send flowers to the Stephens family.