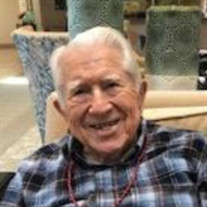 Edward Joseph Vasely Oceanside, CA Edward J. Vasely, 96, died of pneumonia on August 25, 2021, at his residence in Ocean Hills Senior Living. He was born on February 22, 1925, in Detroit Michigan, the eldest of 8, born to Joseph and Matilda Vasely. He graduated from Holy Redeemer High School. Soon after he joined the Coast Guard to serve in WWII. His ship, the Joyce, was active in both the Atlantic and the Pacific. He became an Engineer with the help of the GI Bill. While vacationing in Florida in 1948 he met the love of his life, Jean Frances Cahill, also vacationing there after graduating from Nursing School. Ed and Jean married in 1950 on June 17. After several moves, they ultimately settled in Jean’s hometown of Yonkers. Ed decided he wanted to build things that fly. His career began at Long Island’s Republic Aviation Corp., moving later to Grumman Aerospace. His career highlights include his work on the Lunar Module and the F-14 Tomcat Fighter Jet. After his first retirement, Ed and Jean moved the family to Coronado where he worked for the Navy on North Island for 15 more years. Ed loved serving his country, his church, and his community. While raising his family he was a Boy Scout leader and Coached little league for his sons. He was a self-taught electrician, plumber, landscaper, and general contractor. He remodeled the Yonkers house from top to bottom. During summers between 1957 and 1970 he built the family summer home in upstate NY (with a lot of help from Jean and the kids!). After moving to Coronado, Ed became a member of the Knights of Columbus at Sacred Heart and after retirement, joined the Coronado PD’s Senior Volunteer Patrol and became a docent on the Midway. Ed was a hard-working man, a man of faith, a patriot, a fervent supporter of the Military, a loving husband, and a proud father and grandfather. He had many friends and loved to laugh, tell bad jokes and old stories from his depression-era childhood. He was loved by many. Ed is survived by: His 6 Children: Debbie Cea and her husband Mike of Oceanside, Mike Vasely and his wife Geri of Hopewell Junction NY, Paul Vasely of Hopewell Junction NY, Robert Vasely and his wife Madeline of San Diego, Denise Oliver and her husband Roger of Imperial Beach, and Peter Vasely and his wife Deanne of Virginia Beach. His 8 Grandchildren: Michelle Bailey, James Cea, Danielle Carlucci, Chris Vasely, Ryan Compton, Nicole Irwin, Joshua Vasely, and Charlotte Vasely. His 11 Great Grandchildren: Charlotte Bailey, Adeline Bailey, Claire Cea, Jake Cea, Mason Carlucci, Dylan Carlucci, Skyler Compton, Parker Compton, Jackson Irwin, Jamison Irwin, and Presley Irwin. His sisters: Mary Ann Sheehan of Bloomfield Hills, MI, Betty Ruffino of Northglen, CO and his sister-in-law Sharon Vasely of Newport Richey, FL. Thursday, September 9th: Visitation is from 2PM to 5 PM at Greenwood Memorial Salli Lynn Chapel; 4300 Imperial Ave. SD, 92113. The Rosary will commence at 3:30. All are welcome. Masks are required inside all buildings on the grounds. Friday, September 10th: Ed’s funeral Mass will be celebrated at 10:30 AM, by Monsignor Sheehan at Sacred Heart Church in Coronado, 655 C Ave. Attendance at the funeral is by invitation only at the request of the family. The service will be live streamed for those unable to attend using the link below. https://sacredheartcor.org/worship/live-broadcast/ Interment will be held at Holy Cross Cemetery following the funeral Mass. In lieu of flowers those wishing to do so, may donate in Ed’s name to any of the following: American Parkinson’s Disease Association https://www.apdaparkinson.org/ Wounded Warriors Project https://support.woundedwarriorproject.org/ The Midway Museum https://www.midway.org/

Edward Joseph Vasely Oceanside, CA Edward J. Vasely, 96, died of pneumonia on August 25, 2021, at his residence in Ocean Hills Senior Living. He was born on February 22, 1925, in Detroit Michigan, the eldest of 8, born to Joseph and Matilda... View Obituary & Service Information

The family of Edward Joseph Vasely created this Life Tributes page to make it easy to share your memories.

Send flowers to the Vasely family.