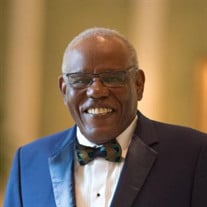 Edwin “Ed” O’Berry Lloyd was born June 1, 1947, in Roswell, New Mexico to Edwin Felix Lloyd and Zenola Lewis Lloyd and was the third of four sons. His family relocated to Washington, DC where Ed graduated from Theodore Roosevelt High School in 1966. Ed earned a Bachelor’s Degree in Psychology from the University of Sioux Falls in 1970. Ed had a passion for education, business and entrepreneurship. After graduation, he began a career as a teacher and later a sales representative for Xerox Corporation. Ed went on to become the President and Chief Executive Officer of his own company, “Everything for the Office.” During the course of his career, Ed was recognized for his astute business insights, and in 1980, he was awarded the Entrepreneur of the Year Minority-Owned Status. Ed was a known staple of the Minnesota business community and was dedicated to supporting the educational, political, economic, and social well-being of the “Twin Cities.” He was an active member of the Minnesota Ethnic Minority Entrepreneurial Group. He retired on June 1, 1997, after 22 years of owning his own business. Upon retirement, he consulted with and served as a mentor to other sales professionals and entrepreneurs. Ed was married to Marcea Bland on June 29, 1996, at the Outing Lodge in Stillwater, Minnesota. He considered Marcea his best friend and his “person.” Ed loved Marcea, his family and friends, golf, Tae Kwon Do, and traveling all over the world. Ed had a special talent for developing relationships and for building deep personal connections with friends and within his community. He was a member of Phi Beta Sigma Fraternity, Incorporated, the Sigma Pi Phi Fraternity, Alpha Pi member boule, and the Monitors Club of Minneapolis-St. Paul. An avid golfer who was also committed to creating a community and supportive brotherhood, Ed was recognized in 2019 for being the founder of the Kiawah Island Black Jacket Golf Tournament. He was an active member of Christ Community Church in Richardson, Texas and the New Creation Church of San Diego, California. Ed was preceded in death by his parents, Felix and Zenola, and his three brothers, Edward, Melvin, and Rodney. Ed leaves to cherish his memory his loving wife, Marcea and his children, Daren Lloyd (Arneidra), Kamani Lloyd, Darius Lloyd (Dana), Randy Staten, Shomari Staten, and Malaika Simmons (Mark); grandchildren: Aleph, Arielle, Akira, Asaph, MaKayla, Amari, Alexander, Merielle Simone, and a granddaughter expected in September; cousin, Ronald Lewis; sister-in-law, Pam Kennedy; nephews, Felix Lloyd, Brandon Lloyd, Ryan Kennedy, and niece, Jasmine Kennedy (Brandon). Ed also loved and nurtured chosen children and grandchildren, Eboni Kirkwood, Torey Lewis, Tori McWilliams, Viviana Penn, and Sage Penn. He had a deep bond with and will be especially missed by surviving close friends Robert Nix, Algernon Tucker, Dr. Boyd Wright, Charles Davis, Greg Smith, Harold Tuck, and Perry Watson and a host of other family and friends. Ed is remembered for his selfless generosity, abundant kindness, intellectual curiosity, passion for children, and unforgettable dance moves. He had a keen interest in history and was a lifelong learner. Until his last days, Ed could be called upon to recall and recite the vivid details of historical events and life memories. His hearty laugh is forever imprinted in the hearts and minds of those who love him. In lieu of flowers, the family requests that you donate to Alzheimer’s San Diego in memory of Ed Lloyd by clicking the link provided below. https://alzsandiego.z2systems.com/np/clients/alzsandiego/campaign.jsp?campaign=110&fundraiser=91874& Family and Friends are also invited to join a Zoom webinar. When: Jul 23, 2021 12:30 PM Pacific Time (US and Canada) Topic: Mr. Edwin (ED) Lloyd's Home going service. Please click the link below to join the webinar: https://us02web.zoom.us/j/87565146514 Or One tap mobile: US: +16699009128,87565146514# or +12532158782,87565146514# Or Telephone: Dial(for higher quality, dial a number based on your current location): US: +1 669 900 9128 or +1 253 215 8782 or +1 346 248 7799 or +1 646 558 8656 or +1 301 715 8592 or +1 312 626 6799 Webinar ID: 875 6514 6514 International numbers available: https://us02web.zoom.us/u/kehQqaoXDw

The family of Edwin O'Berry Lloyd created this Life Tributes page to make it easy to share your memories.

Send comfort and support when it's needed most.