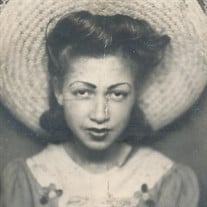 Born September 18, 1928, to Wilbert and Odell Owens in Delano, CA. She was the second oldest of 10 children, 6 girls and 4 boys. Her parents relocated to Phoenix, AZ., where she attended booker T. Washington and Carver Hight School. In1945 the family relocated to Redland, CA where she met the love of her life Arlee E Jones better known as Jab or Ollie. They Were married in Hawthorne, NV in 1948 and together they had 7 children, three girls: LaVoyne, Alrene and Janet and four boys: Harold, Richard, Curtis, and Freddie. In 1966, her husband’s job relocated him and the family to San Diego, CA where they settled and lived for 55 years. Elmertha, was employed as a CNA for the Cloisters of the Valley in San Diego for several years and later worked alongside her daughter Lenie at Jones Daycare until 1996. Elmertha was a faithful member to her church King of the Temple C.O.G.I.C from 1984 ‘til her passing. She is preceded in death by her husband of 68 years, ArleeE. Jones, 2 Daughters LaVoyne M. Jackson and Janet (Charles) Glenn, 2 Sons Richard (Ivy) Jones, Freddie Jones, 1 Great Great Grandson Matai Glenn, her parents Wilbert and Odell Owens, 2 Sisters Thelma (George), Eunice, 2 Brothers Samuel (Debbie) and Winston (JoAnn). She leaves to mourn her passing, her daughter: Arlene (Joseph) Garner; two sons: Harold Murphy, and Curtis Jones; daughter-in-law: Ivy (Richard) Jones; three generations of grandchildren, great-grandchildren, and great-great-grandchildren; three sisters: Dorothy (Norman) Marlene, Betty, (George) Flores; two brothers: Leslie (Irma) Owens, David (Danna) Owens; sister-in-law: JoAnn (Winston) as well as a host of other family, friends and loved ones.

Born September 18, 1928, to Wilbert and Odell Owens in Delano, CA. She was the second oldest of 10 children, 6 girls and 4 boys. Her parents relocated to Phoenix, AZ., where she attended booker T. Washington and Carver Hight School. In1945... View Obituary & Service Information

The family of Elmertha Jones created this Life Tributes page to make it easy to share your memories.

Send flowers to the Jones family.