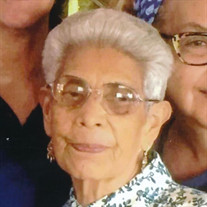 Esther J. Riggins December 20, 1926-September 10, 2021 I have fought a good fight, I have finished my course, I have kept the faith: Henceforth there is laid up for me a crown of righteousness, which the Lord, the righteous judge, shall give me at that day: and not to me only, but unto all them also that love his appearing. (2 Timothy 4:7,8) Esther J. Riggins was born in Jalisco Mexico on December 20, 1926. She was a resident of La Mesa, CA and died at her residence on September 10, 2021. Esther was born to Carmen Vera Bravo and Rosendo Oceguera Valadez. She was the eldest of six children. She was preceded in death by her parents, her brothers, Ramon Oceguera, Alfredo Oceguera, Moises Oceguera, her beloved husband, “Papa” as she affectionately called him, William James Riggins Sr, six stillborn children, her son, Fernando Vera, her daughter, Aricela Riggins Harvey, 3 grandchildren, Fransisco Para, Lenk LaRoque, Cynthia Escalante Borrego and a great granddaughter, Kiarra Collins. She is survived by her brother Jesus (Chuchine) Monte de Oca, her sister Elvia de la Rosas, and ten children-Socorro Olivas, Maria (Ruben) Ecalante, Sandra (Bill) Tesarek, Patricia (Joseph) Weiler, William (Bonnie) Riggins Jr, Miguel (LeAnn) Riggins, Elizabeth (Eric) Liljestrom, Andy (Sandra) Riggins, Ines (Matt) Freeman, Bettina (Angela) Gandara. Esther is also survived by 40 grandchildren and 75 (and growing) great grandchildren. Esther never had a formal education. With her tenacity and assistance of a doctor and his wife with whom she lived and worked, she learned to speak, read and write fluently in Spanish and English. She met her beloved husband while waitressing in Tijuana, Mexico. They were married on November 30, 1953. They were sealed for time and all eternity in the Los Angeles Temple of the Church of Jesus Christ of Latter Day Saints on March 25, 1972. Esther and Bill moved their family from Tijuana, Mexico to Spring Valley, CA in the summer of 1965. This changed the trajectory of their lives in so many wonderful ways. Esther had a green thumb like no other. She gave her plants names, spoke to them and sang to them. Even the feeblest of plants, she brought back to thrive. She loved music and loved to dance. If there was music playing, Esther would be the first one dancing. She enjoyed many genres of music. Her favorite however, was country music. Put on some Johnny Cash, Merle Haggard, Charlie Pride, Marty Robbins or any traditional country music and she was happy. Esther loved to cook. She never used a recipe book. Her husband would often say, “We don’t have much money, but we eat better than anyone in the neighborhood because “mama” is the best cook.” If you entered her home, something was always cooking on the stove. No one ever left hungry whether it was family, friend or stranger. Esther was very proud of her heritage, however one of her greatest accomplishments was becoming a citizen of the United States. She showed her pride in this country by often wearing a flag pin. She loved showing it to her grandchildren and great grand-children. Esther is a member of The Church of Jesus Christ of Latter Day Saints. Over the many years, she was instrumental in sharing the gospel of Jesus Christ with friends and strangers alike. She served willingly and lovingly in many capacities and was a diligent Visiting Teacher. She will forever be grateful to the 3 sister missionaries who taught her and her family the gospel of Jesus Christ- Sister Margaret (Pryor) Williams, Sister Mary Bullock and Sister Joyce (Weaver) Nelson. The restored gospel of Jesus Christ was the driving force and focus of her life. The lives of those she touched as she taught and bore testimony of Jesus, were forever changed. Esther loved her husband and family. They brought her the greatest joy. She “mothered” for more than 80 years, not only her children but her brothers and sisters...anyone who needed a mom. “Her children arise up, and call her blessed; her husband also, and he praiseth her.” Proverbs 31:28 Her life wasn’t easy, yet she overcame many obstacles, illnesses and challenges, pressing ever forward in faith. She taught her family to be obedient, honest, humble, upright, loyal, love fully and completely, to work hard, be your best, serve diligently, honor your name, and most importantly to love God and glory in His name. Esther may be gone from us for a season, however her influence and love will abound…Until we meet again.

Esther J. Riggins December 20, 1926-September 10, 2021 I have fought a good fight, I have finished my course, I have kept the faith: Henceforth there is laid up for me a crown of righteousness, which the Lord, the righteous judge, shall give... View Obituary & Service Information

The family of Esther J. Riggins created this Life Tributes page to make it easy to share your memories.

Send flowers to the Riggins family.