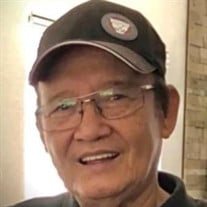 Eustaquio (Jun) Padrigon Portes, Jr. was born on Dec. 23, 1941 in San Juan Nabua, Philippines to proud parents: Eustaquio Rosales Portes, Sr and Maria Padrigon Portes. He had six siblings: Consuelo, Margarito, Nancy, Luis, Salvador and Domingo. He was the fourth oldest out of the seven. He was married to Amy Rios Portes on September 14, 1971. He had a total of six children: Emily, Marites, Edwin, Menardo, Jane and Marnele. Jun had some college completed in the Philippines for architecture. He then relocated to San Diego, California in 1986 and became a U.S. citizen on April 1, 1994. He worked at Scripps Green as a cook. During his life here in San Diego, his family grew. He had a total of fifteen grandchildren: Jesse Ray, Jasserin May, Raymon Jr, Johnsten, Roseline, Jason, Erique Reis, Elijah Neil, Ethan Nigel, Victoria Rae, Mary Faith, Alexa Mae, Rhizelle Amy, Rylee Ky and Aubrey Renee. Jun loved his family, and worked very hard to provide for them. He was a very intelligent, family-oriented man, and was very well respected. He was a child of God and a devoted member of the Church of Christ. Some of his interests he had in life were drawing, singing, cooking, traveling and spending time with his family. Jun had a heart of gold. He was a hero to his children and his grandchildren. He had a contagious smile, and always lit up the room. Jun passed with his entire family by his side on June 5, 2021 at 2:22 pm. He will be forever missed but never forgotten.

The family of Eustaquio P. Portes created this Life Tributes page to make it easy to share your memories.

Send flowers to the Portes family.