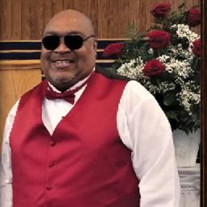 Gregory Kirk Terry, Sr. (also known as Big Greg, Greg, Terry, Brother Greg, Dad and Papa) accepted Christ as his Lord and Savior at a young age at Calvary Baptist Church and in 2010 he joined Mount Erie Baptist Church under the leadership of Pastor Walter G. Wells. Greg was received home by our Lord and Savior Jesus Christ on January 20, 2022. Greg was the third of five sons, born to the late William and Blanche Terry. He and is brothers grew up on San Miguel Ave. and he attended schools in the San Diego Unified School District. Greg and his brothers loved to play dominoes, tell childhood stories, and try to out sing each other. Greg was a hard worker. He learned at a young age, after working briefly at U-Haul, that he was not meant to be an employee, he was meant to be a business owner. So, in 1980, like the Boss he was, he started his own business - Ideal Piano Movers, which later became United Piano Movers. Greg formed close bonds with his employees, son and grandsons while teaching them the business - a business he proudly owned and operated. He was a loving husband, brother, dad, grandpa, uncle, friend, provider, and boss. All who knew Greg knew he was a sports fanatic. At times you could find him with two tv’s on in his living room, watching two different sporting events at the same time. He was a season ticket holder of the San Diego Padres, he often attended Aztec games, Laker games, and Charger games with friends, family and, on occasion, by himself. He was also a die-hard Dallas Cowboys fan. Greg loved to travel. Many of his trips were driving cross country and singing along to the O’Jay’s, Al Green, and more. Every year, he and his wife would spend the entire month of December in Cincinnati, OH with his in laws. In addition to his parents, Greg was preceded in death by his two younger brothers Philip and Donald Terry. He leaves to cherish his memory his wife Ruth Ann of twenty-one years, his son Gregory Terry Jr., his daughter Tira Terry, and their mother, Donna Richardson, all of San Diego, CA. Two stepsons, Antoine, and Micheal Frye of Cincinnati, OH. Two grandsons, Deonte Terry, and Latrelle Terry of San Diego, CA. Three brothers, William Terry III (Regina) of Menifee, CA, Latif Salaama (Mary) of Prentiss, MS, and Ralph Terry of San Diego, CA. Also, a host of nieces, nephews, cousins, and friends. Greg and his signature laugh will greatly be missed

The family of Greg Kirk Terry Sr created this Life Tributes page to make it easy to share your memories.

Send flowers to the Terry family.