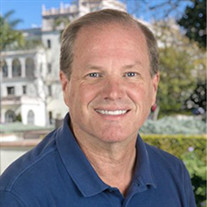 Harry Joseph Kelly, much loved husband, brother, uncle, cousin, friend, and colleague, passed away suddenly from a heart attack in San Diego, California, on June 18, 2021, at the too young age of 58. Joe was born on November 17, 1962, in Calgary, Alberta, Canada, the middle of Bernie and Ruth Kelly’s five children. He was a curious and intelligent child with a talent for finding trouble, taking things apart, and sometimes putting them back together. Joe grew up in Calgary and after graduating from St. Francis High School, went to the University of Alberta and later earned a Master’s Degree from the University of Maryland. Never a fan of Calgary’s winters, Joe left in search of a better climate, first moving west, to Vancouver and Kamloops, British Columbia, and finally, south to San Diego where he found his ideal surroundings. While it’s never easy to move to a place where you don’t know anyone, Joe’s friendly, easy-going manner, thoughtfulness and very well-developed and unique style of humor helped him develop new friendships. In San Diego, he also met Jacque, who became his soulmate, and they were married a couple of years later. With this event, he gained a second family. Joe worked in the Office of the Registrar at the University of San Diego since 2010. Recently, he proudly became a United States citizen, but Canada was always in his heart. He was the ultimate sports fan, always loyally following the Calgary Flames hockey and Calgary Stampeders football teams, and enjoying getting out for a round of golf. In addition to his great wit and friendly personality, he was known for his love of dogs and his “Joe-isms.” He is mourned by his wife Jacque; his siblings Jack (Susan, Sebastian and Malena), Margaret, Ruthanne (David, Dana, Amanda, Christian, and Sarah) and Dan (his life-long partner in crime); father-in-law Leo Boco; brothers-in-law Rico (Eva, Maryl, Erik, and Nick) Boco and Jeffrey (Isabel, Jordan, Ilyssa) Boco; and many treasured cousins. He was predeceased by his parents, Bernie and Ruth Kelly. In lieu of flowers, please consider a donation to Joe’s favorite charity (Children International, Ref# 6070394) or another charity of your choice.

Harry Joseph Kelly, much loved husband, brother, uncle, cousin, friend, and colleague, passed away suddenly from a heart attack in San Diego, California, on June 18, 2021, at the too young age of 58. Joe was born on November 17, 1962, in Calgary,... View Obituary & Service Information

The family of HARRY JOSEPH KELLY created this Life Tributes page to make it easy to share your memories.

Send flowers to the KELLY family.