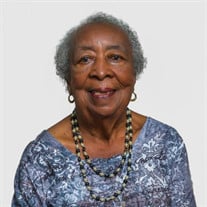 Jessie Beatrice Hargrow was born May 6, 1923, in Little Rock, Arkansas to Willie and Catherine Hargrow. She was the third child of three girls, following her sisters Essie and Arlee. After moving to Louisiana she attended Monroe Colored High until her family moved to California where she graduated from Jefferson High School in Los Angeles in 1941. Jessie was always interested in Home Economics. This was exhibited time and time again through her love of creating items for her home including a paper plate holder that her family encouraged her to patent. She declined, however. After high school, Jessie attended cosmetology school which allowed her to become a beautician. She worked as a beautician until approximately 1958. It was during this time that she met a tall, smooth-talking, and rapping Texan named Henry Arnold Ellis. They fell in love and were married on September 27, 1947. To this union were born two daughters, Shairon and Shelia. Jessie accepted Christ at an early age and was active in ministry at the St. Paul Baptist Church in Los Angeles. During the mid-1960’s Jessie began working for the Los Angeles Unified School District as an instructional aide. She worked with children experiencing educational challenges, as well as riding on the school bus with the students on their way to school. Shortly after her retirement from Los Angeles Unified School District Jessie and Henry pulled up stakes and moved to Perris, California. There they united with Temple Baptist Church. Affectionately called Nana by many, she loved to open her home to family and friends. She always had a meal readily available. She would sit in front of the TV making crusts (crustes) for her pies and cobblers while Henry watched a game. She enjoyed sewing, crafts, needlepoint, and sharing all of her accomplishments with others. Her heart was huge and full of love! On the morning of Tuesday, November 23, 2021, God called his child home to Glory. Jessie was preceded in death by her husband Henry, her parents, and her sisters. She is survived by her daughters Shairon Nevills and Shelia Curry (Harvey), grandsons Courtenāy Brown (Shelli) and Wade Curry (Porsia), granddaughter Staci Jackson (Reggie), 7 great-grandchildren, and a multitude of nieces, nephews, family, and friends who have been blessed to know her and be a part of her life. While we mourn the loss of her presence, we will always celebrate the life that she lived, the legacy she left, and all of the joy she brought to everyone she met.

Jessie Beatrice Hargrow was born May 6, 1923, in Little Rock, Arkansas to Willie and Catherine Hargrow. She was the third child of three girls, following her sisters Essie and Arlee. After moving to Louisiana she attended Monroe Colored High... View Obituary & Service Information

The family of Jessie Beatrice Ellis created this Life Tributes page to make it easy to share your memories.

Send flowers to the Ellis family.