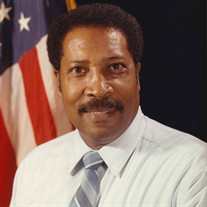 John W. Hatchett Celebration of a Life Well Lived On a cold winter day in 1935 in the city of Henderson, Kentucky, a beautiful brown baby boy was born to Arch and Rosa Hatchett. They named their fifth child John. John was an obedient son who adored his parents. As a child he was sprinkled at Trinity AME Zion and attended church there. While attending Alves Street school, favorite teacher, Miss Annette Brown, encouraged her students to excel and pursue their dreams. At the age of eight, John’s dream was to join the United States Navy. At Douglas High School, John played the tuba in the band, enjoyed boxing and playing football. Often before school he helped his father by performing custodial services at the local theater. He also worked at Hatchett’s Grocery store and helped his father at private homes. He cherished one of his father’s economic principals, “Don’t ever spend all of your money”. Which he learned after purchasing his first car. Shortly after graduation John pursued his dream of joining the Navy (1955). His career would span 30 years of dedicated service to his country. He retired as a Master Chief Petty Officer. John met his future wife, Gertrude, through his favorite cousin, Thelma, who happened to be besties with Gertrude. Their 55-year love affair was filled with adventure, dancing and laughter. John and Gertrude had two lovely daughters, Sherrie and Andrea in the early years of their marriage. After retiring from the USN, John held a few different jobs and settled in sunny SoCal. In about 1984 John was baptized at Mt. Sinai Baptist Church, San Diego, where he later was Ordinated as a Deacon, was a Trustee as well as a Bible Study Teacher. John absolutely loved the Lord and would always give God praise and glory. While a teacher he would spend hours pouring over various resource materials to prepare for his class. When class members had questions, he would seek God’s guidance in sharing answers. John was known for encouraging his students to study and he enjoyed giving away Christian Life Bibles. Days before the end of this journey John made the declaration “What a mighty God I serve”! He was still recruiting people he had interactions with to accept Jesus Christ and yes to join the Navy! John leaves as part of his legacy of the Love of God, contributing to his church, various religious organizations and non-profits. He was a proud Charter Member of the NMAHC (National Museum of African American History and Culture). His legacy in teaching, excellence, self-reliance and ‘never quitting’ has made an impression on his daughters, Catherine Gray and Sherrie Hatchett. John is also survived by grandchildren: M. David Brown (Andrea), Jonathan Jackson, Aquasha Jackson and Sean Hatchett, great grandchildren: Kylee Jackson, Devin, Dominic and Deion Brown. He also leaves to cherish his memory his sister, Carolyn Thompson (Nate), brothers James (Gwen) and Paul (Willa) Hatchett and a host of relatives, friends and others he met along the way. John enjoyed his earthly journey and is now in the presence of the Lord. Let us therefore come boldly unto the throne of grace, that we may obtain mercy and find grace to help in time of need. (Hebrews 4:16 KJV John W. Hatchett http://webcast.funeralvue.com/events/northstar/70069/hash:DF3DDE5F0EE0BF37

John W. Hatchett Celebration of a Life Well Lived On a cold winter day in 1935 in the city of Henderson, Kentucky, a beautiful brown baby boy was born to Arch and Rosa Hatchett. They named their fifth child John. John was an obedient son who... View Obituary & Service Information

The family of John Will Hatchett created this Life Tributes page to make it easy to share your memories.

John W. Hatchett
Celebration of a Life Well Lived
On a cold winter...

Send flowers to the Hatchett family.