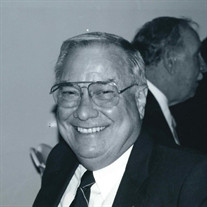 John Joseph McPhillips III 1936 - 2021 May 4, 1936 - June 24, 2021 John J. McPhillips, beloved son, brother, husband, father, grandfather, uncle and friend, passed away quietly on a Thursday morning in the comfort of his own home after a valiant fight with Leukemia. Born to John and Pat McPhillips, John grew up and began his education in Los Angeles. Prior to completing his undergraduate studies, John enlisted in the United States Army and continued his service to his beloved country in the Marine Corps Reserve. Following his return from service overseas, John graduated with a business degree from Loyola University and began his career in Industrial and Commercial Real Estate as a broker. After meeting on a blind date, he fell in love with and married Patti. They were married for 56 years and together they were blessed with three daughters, two sons-in-law, and five grandchildren. John had a passion for life itself. He was a devout Catholic with an unbreakable faith, a steadfast family man, a proud veteran, a loyal friend, and known by all as a good and respectable man. John was an avid golfer, a Friendly Son of St. Patrick, and served as a Knight of Columbus. After raising a family of his own and retiring from a rewarding and successful career, John enjoyed attending his grandchildren's activities with pride. He was always up for a celebration and often took joy in getting the party started. John was also a guiding force and positive role model to those around him, and nothing gave him greater joy than spending time with his family and friends. John will be deeply missed by those who knew and loved him, but we are comforted by God's grace, knowing that he is resting peacefully with the Lord. Service information Funeral Mass July 16, 2021 at 11:00 a.m. St. Therese of Carmel Catholic Church 4355 Del Mar Trails Road San Diego, CA 92130 In Lieu of flowers, donations can be sent to: The Elizabeth Hospice mail check to 500 La Terraza Blvd. Suite 130 Escondido, CA 92025. 760-796-3737 The American Cancer Society https://donate3.cancer.org/ Wouded Warriors https://support.woundedwarriorproject.org/

John Joseph McPhillips III 1936 - 2021 May 4, 1936 - June 24, 2021 John J. McPhillips, beloved son, brother, husband, father, grandfather, uncle and friend, passed away quietly on a Thursday morning in the comfort of his own home after a valiant... View Obituary & Service Information

The family of John J. McPhillips created this Life Tributes page to make it easy to share your memories.

Send flowers to the McPhillips family.