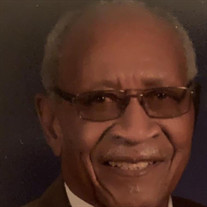 John Walter Rentie Jr. was born November 5, 1934 to John Walter Rentie Sr. and Ardella (Byrd) Rentie in Henryetta, Oklahoma. John united with the Mt. Zion Baptist Church in the Henryetta Community at an early age. John, known as Junior, was preceded in death by his parents and five siblings. John joined the Marine Corp after high school. He received many military awards including a Purple Heart and good conduct medals. His military career as a Staff Sergeant was cut short because he was severely wounded in Vietnam. He later worked for Teledyne Micronetics. After 10 years of employment, he decided to become self-employed as a "master recylist". John became known to many plumbers and contractors in the San Diego area. He continued in this business until his health began to fail. One of John's greatest delights was looking forward to spending every Sunday afternoon and holidays with two of his grands, Jaelah and Cameron. Papa enjoyed playing games, bending the rules, and eating his famous BBQ ribs and snacks! "Mr. Rentie" the unofficial Mayor of Westover Place, who knew everybody and everything that occurred on the street and beyond; was loved and will be missed by many neighbors and friends. Leaving to mourn his passing: his wife, Odessa Rentie, San Diego, California; one sister: Elsie Thomas, Cleveland, Ohio; four sisters-in-law: Essie Boyd, Houston, Texas; Doris Floyd, San Diego, California; Betty Jackson, Bay City, Texas; Geraldine Rentie, Grifton, North Carolina. Five Children: Brenda Huey (Kenneth), Tulsa, Oklahoma; Pamela Rentie, Tulsa, Oklahoma; Debra Adams, Fredericksburg, Virginia; Andrea Rentie, Spring Valley, California; John W. Rentie III (Charlene), Murrieta, California; twelve grandchildren; twenty-one great-grandchildren; and numerous nieces and nephews – who will mourn and share their memories of Uncle Junior. For everything there is a season, and a time for every matter under heaven:a time to be born, and a time to die a time to plant, and a time to pluck up what is planted; a time to kill, and a time to heal ,a time to break down, and a time to build up;a time to weep, and a time to laugh a time to mourn, and a time to dance; a time to cast away stones, and a time to gather stones together;a time to embrace, and a time to refrain from embracing; a time to seek, and a time to lose; a time to keep, and a time to cast away;a time to tear, and a time to sew;a time to keep silence, and a time to speak; a time to love, and a time to hate; a time for war, and a time for peace. Ecclesiastes 3:1-8 ESV

The family of John Walter Rentie created this Life Tributes page to make it easy to share your memories.

Send flowers to the Rentie family.