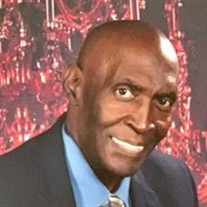 Johnny L McKinley was born on December 30, 1950 in Longview, Texas. Johnny left Texas for California in 1955 when his parents, Lee Amos and Geneva McKinley moved to San Diego for work. Johnny had a strong belief in Christ and accepted our Lord and Savior at a young age and was baptized at the 38th Street Church of Christ in San Diego. He was a devoted member until he moved to Murrieta, Ca where he resided for the last 24 years. Johnny graduated from San Diego Lincoln High School in1969. Soon after High School graduation Johnny enlisted in the United States Navy. When his enlistment was complete he returned to San Diego where he attended San Diego City College and he met the love of his life, Helen Price. They were united in marriage in 1976. Johnny and Helen enjoyed their union for 45 years raising family, traveling the world, watching his favorite old western movies and most recently restoring his 1994 Chevy truck. Johnny was devoted to his family, and lived by the value of hard work, knowledge, perseverance, excellence, and pride. He ensured that Johnna and his grandchildren were well prepared for life and did not go without whatever they needed as they grew up in a loving and fun-filled home. He was loved by many and considered as a "fatherly" or "brotherly" figure to a lot that knew him as he was willing to give advice and guidance, which he gave openly and freely. He always made you feel as if you were a part of the family. Johnny spent 44 wonderful productive safety free years at SDG&E (Sempra Energy) as a Journeyman, Electrician. He would always tell the story that once he got married he wanted a job that would provide opportunities for advancement and job security. Johnny decided that San Diego Gas and Electric (SDG&E) was that place. When Johnny went to SDG&E to apply, he was told they weren’t hiring. Johnny persuaded them to take his application anyway. The Human Resource Manager was impressed with Johnny’s tenacity and found him a position within the company. Johnny took advantage of all SDG&E had to offer. Anyone who knew Johnny, knew he loved his job. His favorite past times included bowling in various leagues across San Diego, where he once bowled a perfect game of 300 points, playing chess, dominoes, bid whist, watching all types of sports, but there was nothing better than watching his beloved "Raiders". But above all there was nothing more important than spending quality time with his friends and family. Johnny is preceded in death by his mother Geneva McKinley, father-in-law Nathaniel "Nate" Goodwin and to cherish his memory Johnny leaves behind his loving wife of 45 years Helen McKinley, his father Lee Amos Mckinley, his mother-in law Ruth Lorraine Goodwin, his sister Shirley James, his loving daughter Johnna Taylor(Ramsese), his grandchildren Aliyah Johnson, Jordan Howden, Ramsess Howden, and great-granddaughters Carmen Jai Golson and Camyrn Janae Golson, along with many in-laws, nieces, nephews, cousins and a host of friends to mourn his passing.

Johnny L McKinley was born on December 30, 1950 in Longview, Texas. Johnny left Texas for California in 1955 when his parents, Lee Amos and Geneva McKinley moved to San Diego for work. Johnny had a strong belief in Christ and accepted our Lord... View Obituary & Service Information

The family of Johnny Lee McKinley created this Life Tributes page to make it easy to share your memories.

Send flowers to the McKinley family.