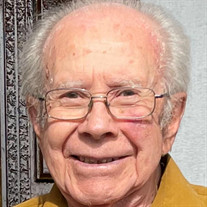 Joseph Camarillo Duran was born in Pueblo Nuevo, Guanajuato, Mexico, son of Tranquilino & Estefana Duran. He immigrated to the United States with his mother and siblings, Isabel, Candelario and Agustine after his father, a sharecropper, passed away. Graduated from San Fernando High School, served in the US Air Force, becoming a US citizen. In 1961, he married Matilda Aguilera, settled in Sylmar, CA working for General Motors and together raised three children, Richard, Elizabeth and Samuel. In 1971, after the Newhall Earthquake, moved to San Diego, California. There he worked for a short time at California Automobile Association and then California Linen & Industrial Supply from which he retired. After which he started a handyman business which he continued until his seventies. he passed away early in the morning in his own home, from heart failure, after a brief period of hospice care. Joe, as many of his friends and family referred to, was always determined to learn and share his entire life. Auto mechanic, construction or model building, he self-taught and refined his skills. His eagerness to learn more about anything he could, was matched with his desire to share the knowledge he gained. Taking up writing short stories and accounts to do so. He shared his love of nature and music with his family and encouraged others to ask questions and research the world around us. he gave back to his church and community on many levels. Helping with church repairs and fabrication of the baptismal font at St. Patrick's Parish as well as fabrication items for the annual fundraisers. Regularly donated blood until his battle with cancer 10 years ago precluded him from doing so. He was active with neighborhood Watch and served as block captain for several years. he fabricated numerous coffins, donated for the interment of abandoned children who had died. He was a craftsman, mechanic, tinkerer, writer, mentor, carpenter, MacGyver, botanical enthusiast, jack of all trades; a renaissance man, self-taught and always willing to share. He is survived by his wife, three siblings, three children, grandchildren, great-grandchildren and great-great-grandchildren.

Joseph Camarillo Duran was born in Pueblo Nuevo, Guanajuato, Mexico, son of Tranquilino & Estefana Duran. He immigrated to the United States with his mother and siblings, Isabel, Candelario and Agustine after his father, a sharecropper, passed... View Obituary & Service Information

The family of Joseph Camarillo Duran created this Life Tributes page to make it easy to share your memories.

Send flowers to the Duran family.