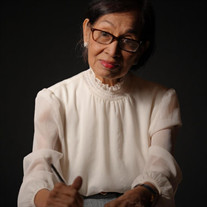 A Journey of Life and Love of Julia Pagdanganan-de Leon By: Salvador Idos & Vida de Leon Julia Pagdanganan-de Leon, affectionately called “Lily” by people who have known her, joined her Creator on March 20, 2022 in San Diego, California after a prolonged battle with Breast Cancer. She was born on October 8, 1946 in San Marcos, Calumpit, Bulacan, Philippines. She attended Mapua University where she obtained a course in Business Administration. She got married to the love of her life, Martin de Leon with whom she had six children; Joseph, Veronica, Alexander, Margarita, Marcelino and Natividad and 9 grandchildren. Lily’s life was very remarkable as it is truly inspiring. She was a woman of great faith whose life in many ways reflected the love and the goodness of her Creator. Her life shows how despite tremendous adversities and challenges, one could still attain happiness and self-fulfillment in our journey of faith. For a long time, Lily’s life was spent in taking care of her family. However, everything changed drastically when her husband died of a tragic accident in 1991. He was assassinated. The brutal death of her husband upended her life and all of a sudden she had to assume the role of both a FATHER and a MOTHER. How Lily responded to this heartbreaking event defined the rest of her life. Instead of being consumed with anger and bitterness, she made the decision to embrace her fate with LOVE and COMPASSION. As a single parent for more than 30 years, she devoted her full time and energy to her children. She has made it her life’s mission to provide each of her children the right education for them to become responsible adults. By God’s grace, all her children were able to acquire a college education and all were immersed in Christian values. It is interesting to recall that as a widower, she had to do odd jobs to support her family – a knitter, a florist and a cook. She also worked as a food handler with San Diego Unified School District serving lunch to many students. But the most honorable job she did was to become a homemaker and a mother not just to her children but to the community as well. She found herself managing their farm, something her husband has been doing all the time, when he was still around. She treated her farmers with JUSTICE and RESPECT. In return, they responded with admiration and mutual respect. Lily was very generous in sharing her Time, Talent and Treasure. People flocked to her residence seeking advice believing that she was endowed with words of wisdom. She was soft spoken which belies the fact that she was actually a very STRONG WOMAN. She believed that she spoke WORDS of TRUTH, which are not negotiable. There is not a bone of meanness in her whole being. As a person, she was not judgmental which enabled to love her fellow man unconditionally. On July 17, 2017, she was diagnosed with stage 4 Breast Cancer. She accepted the diagnosis with remarkable surrender to God’s will. She carried her cross and her pain with quiet resignation without a bit of complaint. Miraculously, she survived Breast Cancer for almost 5 years! While in the Philippines, other Cancer patients would come to her seeking consolation and advice. Thus, she devoted her time in being active in helping to bring joy and relief to Cancer patients in Nueva Ecija. They hold an annual Christmas party through THE RAINBOW PROJECT, a support group for cancer patients that her oncologist and her daughter Vida have organized and were inspired by her idea. It’s amazing how God was using her even in her most difficult situation! Indeed, Lily had a life well lived, a life fulfilled. She will continue to live in the stories we will tell. May she rest in peace. To send flowers or memorial support to Lily’s family and her advocacy to help Breast Cancer patients in the Philippines, you may send it through: USA VENMO @Natividad-deLeon-1 ZELLE Natividad de Leon - 619-845-9585 Or check addressed to Natividad P de Leon P.O. Box 212008, Chula Vista, CA 91921 Philippines GCASH Marcelino de Leon – 0917-899-0008 BDO Natividad de Leon – 010448005368

The family of Julia P De Leon created this Life Tributes page to make it easy to share your memories.

A Journey of Life and Love of