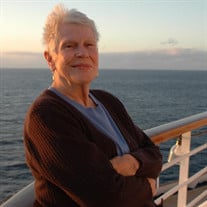 Kathleen Maren Almgren Wells, a wife, mother, grandmother, friend of many, social worker, and devoted Christian throughout her life, died in San Diego June 27 after a long battle with rheumatoid arthritis and several years with dementia. She was 82. Kathleen (Kathy) was born in San Francisco to Carl and Gilberta Almgren (née Madsen) on July 10, 1938, and raised in Redwood City, Palo Alto, and environs, with her brothers Carlton (older) and James (younger). She was graduated from Sequoia High School in Redwood City in 1956 and, after two years at Pacific Lutheran in Tacoma, WA, was graduated from California State University, San Jose, in 1961 with a B.S. in psychology and education. From a young age, Kathy had a heart for the poor and gravitated toward serving the lost and the lonely in the name of Jesus. Her faith was shaped by the warm Lutheran piety of her parents and by the evangelical ethos of the Mount Hermon Christian Conference Center, where she camped as a girl and then served over nine summers (1950-58) as a waitress, lifeguard, swimming instructor, and childcare worker. From 1961-64, she taught English and girls’ P.E. to fifth through eighth graders in the Oakland Public Schools. In 1965, she worked as a counselor and companion at Chalet Bellevue, a home for children and adults with cerebral palsy within the L’Abri Fellowship, Huemoz, Switzerland. After her two boys were in school, Kathy worked as a counselor with non-traditional students at Grand Rapids Junior College, Grand Rapids, MI, from 1978-83. She returned to school in 1979 to earn both a M.A. in Communication Arts and Sciences and a Master of Social Work from Western Michigan University in Kalamazoo, after which she served as a licensed social worker until her retirement in 2001. During these years, Kathy worked in public and private social service and counseling settings in Western Michigan, including Grand Rapids Junior College’s “Project Intercept” with ex-offenders, the YWCA, two shelters for battered women, and the Allegan County Health Department. In San Diego, Kathy served as executive director of the Community Resource Center in Encinitas. Kathy often said that her greatest joy in life was motherhood, which she treated with utmost seriousness. A natural caregiver with a special gift for kindness and empathy, she tended to the emotional lives of her young children with rare attentiveness and took pains to seed Christian faith, compassion, and independence as they matured. Ever the analyst, she loved to untangle the skein of a problem and came alive in the face of genuine vulnerability. All of these gifts were also placed steadfastly in service of the many friendships with which Kathy’s long life was blessed — each personal connection carefully curated on the way to deep sharing and, please God, inner healing, which was her life’s work. “As I understand myself,” she wrote in the early 80s when applying to graduate school, “I believe my greatest strength is based on my philosophy of life. As a committed Christian, I believe that every person is of infinite value and worth. My own attention to this reality has the effect of deepening the seriousness with which I view and respond to another person’s social, emotional, and spiritual struggles. Insofar as these needs can be addressed through social agencies and well-designed and well-implemented programs, I want to be involved with such vehicles of treatment and therapy.” Though her body was wracked with a debilitating rheumatoid arthritis for the last 35 years of her life and she struggled with depression, she persevered to the end in faith, hope, and love. Sharing in Christ’s sufferings by becoming like him (Phil. 3:10), she grew increasingly into a habit of spiritual reading of Scripture and contemplative prayer that continued to produce a harvest of wisdom, kindness, and works of mercy. In San Diego, Kathy was a blessing to her neighbors in Del Mar as well as to old friends, former colleagues, and clients. As long as her body and mind allowed, she remained ready to befriend the seeker, the sojourner, and the stranger: to offer a cup of tea, listen patiently, advise, tutor, mentor, and pray. She radiated joy and pleasure in the company of her young granddaughters and relished every opportunity to share with them the love for reading and silly moments, especially if it involved ice cream. At the end of her life, she moved to St. Paul’s Manor and finally to Stellar Care, made possible by the generous support of St. Paul’s PACE program, an arm of St. Paul’s Senior Services Foundation, itself a ministry legacy of St. Paul’s Cathedral, San Diego. Kathy is survived by her son Jonathan Wells of San Diego, his wife Stephanie, and their daughters Valentina and Maya; son Christopher Wells of Dallas; brother James Almgren (and Sonja Sogge) of Riverside, and children Erica Almgren Steffenson (Steven) and Jeffrey Almgren (Cate); and by Karen Almgren of Mountain View, CA, widow to Carlton, and their children Eric Almgren (Melissa), Hans Almgren (Holly), and Kristan Kirsh (Steven). A funeral Mass for Kathy Maren Almgren Wells will be held at All Saints’ Episcopal Church, 625 Pennsylvania Ave., San Diego, CA, 92103, at noon on Tuesday, July 13th. In lieu of flowers, the family encourages gifts to St. Paul’s Senior Services Foundation (designated toward “St. Paul’s PACE Supportive Housing”: https://www.stpaulseniors.org/donate/) and/or Homeless Veterans of San Diego (https://homelessveteransofsandiego.com/).

Kathleen Maren Almgren Wells, a wife, mother, grandmother, friend of many, social worker, and devoted Christian throughout her life, died in San Diego June 27 after a long battle with rheumatoid arthritis and several years with dementia. She... View Obituary & Service Information

The family of Kathleen Maren Almgren created this Life Tributes page to make it easy to share your memories.

Send flowers to the Almgren family.