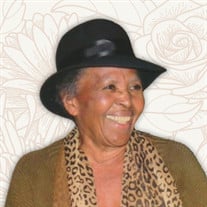 Lorraine Ringgold was born to the proud parents of Thomas and Mariah Morris on November 26,1930 in New York City. Later, Lorraine and her brother Thomas moved to Virginia at a very young age to be raised by relatives so their father could return to work in New York after the passing of their mother, Mariah. Lorraine later returned to New York to attend Hunter College. She met Harold Wesley Ringgold of Coney Island, New York and married in 1949. Lorraine gave birth to two children, Joan (born 1949) and Harry (born 1959). Lorraine and Harold moved to San Diego in 1962. In what became decades of challenges, Lorraine displayed strength, courage and tenacity through it all. While her husband was hospitalized after a stroke, Lorraine fought congress for her husband’s right to receive veteran’s benefits from the U.S. Army and won. He spent the next 10 years and 25 days in the hospital. Her daughter Joan later became hospitalized from spinal fusion, again with lupus, and later from a serious car accident. She fought for the best medical care for her daughter, taking her across the country to the Mayo Clinic. She even fought racism in the workplace. In light of these trials, Lorraine managed to keep her son sheltered as she continued to attend every baseball game throughout his youth. During Lorraine’s 30 years in the post office, she became lifelong friends with many good people who later became family. Lorraine often hosted parties at her home where she could be found dancing and playing the same song over and over. She also had a green thumb and used her skill to create a small farm in her backyard with a flourishing garden, roosters, chickens and ducks. She enjoyed building things and embarking on neverending DIY home improvement projects. Other not so small projects were all of the family businesses she helped create and support such as T&L Maintenance, The Seafood Exchange, Wings of Love (dove release) and Hot N’ Fast Food Delivery, the first of its kind. In her downtime, she enjoyed traveling back home to visit family in New York and Virginia, doing puzzles with Joan, playing Sudoku and in her early days, Bid Whist. As a grandmother, she was quick-witted, strong handed and imparted as many life lessons a child could endure. Lorraine loved her family, her friends, and her neighbors with abundance. Lorraine not only took care of her family, but also extended friends and family. She always had a hot meal at the ready and would take you in if you needed help. She was our greatest advocate and supporter, but if you didn’t have skin in the game to help yourself, she couldn’t be bothered. That was Lorraine. Her wisdom was a gift to all who knew her. We will remember her for her style, class, strength, perseverance and how she loved unconditionally. Lorraine was preceded in death by her husband, Harold Wesley Ringgold, her brother, Thomas Morris, her daughter Joan Ringgold and grandson, Jonathan Ringgold. Lorraine leaves to cherish her memory her son Harry Ringgold and wife Claudia, 8 grandchildren: Naomi “Nikki” Craft and husband Paul, Jessica Dorsey and husband Derron, Rikki Ringgold and wife Daisy, Tony Pacheco and wife Cassandra, Jazmin, Michael, Brooklyn and Kingston, 4 great grandchildren: Nia, Arianna, Amyah and Alina, and a host of relatives and friends.

Lorraine Ringgold was born to the proud parents of Thomas and Mariah Morris on November 26,1930 in New York City. Later, Lorraine and her brother Thomas moved to Virginia at a very young age to be raised by relatives so their father could return... View Obituary & Service Information

The family of Lorraine Ringgold created this Life Tributes page to make it easy to share your memories.

Lorraine Ringgold was born to the proud parents of Thomas and...

Send flowers to the Ringgold family.