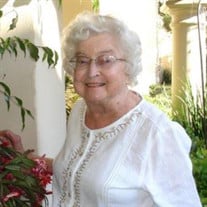 Louise Marie (Tinnermann) Rether August 20,1917-November 28, 2021 On August 20,1917 Louise Marie Tinnermann was born in Philadelphia, Pennsylvania to Anna Geick and Carl F. Tinnermann of Dusseldorf, Germany. Louise had one older sister Frieda, who passed away at the age of 86, a nephew, Bill Nagle (now deceased), and niece Sandy Reid who lives in Florida. As a young woman, Louise worked in medical research with Dr. Arthur Steinberg. She drew what was seen under the microscope very precisely, before technology was developed to take photographs of it. She once met Albert Einstein at a medical conference and he asked her to explain the research she had on display. Dr. Steinberg developed a formula for coagulating blood. Louise received permission to share this critical life saving formula with our father, Robert W. Rether, who was in the Army working in administration in a hospital. He in turn was able to share it with Dr’s. and medical personnel. Louise had a love for music, played piano, and sang in the choir at Trinity Lutheran Church in Pennsylvania, Grace Lutheran Church, San Diego, and at Christ Lutheran Church for over 60 years. Louise met Robert W. Rether, known as ‘Bob,’ at a Church Youth Leadership Training Camp. They corresponded through letters for 5 years. He used to tell us that when he saw her leading devotions up in front of the church, he knew she was the girl he wanted to marry. He sent for her to come to California and they were married on December 24th, 1942 at Grace Lutheran Church in San Diego, CA. Bob was in the Army during World War II, so they moved, to Texas while he was stationed there. The Lord blessed them with 3 daughters. Sherry was born in Abilene, and Bonnie in San Antonio, Texas. Linda was born here in La Mesa, California. Louise was a devoted Mother, Girl Scout leader, Sunday School teacher, attended Bible Classes, Stephens Care Ministry and was a dedicated church choir member. She also helped out with church Youth groups, attending camps as a counselor. She was active in the P.T.A. at her daughters school, a Girl Scout leader and later a member of the Soroptimist Club International. Louise, Bob, and their 3 daughters, lived in La Mesa for over 45 years. In 1954, they began attending Christ Lutheran Church in La Mesa. Together, Louise and Bob ran Rether Business Machines, with Louise working part-time as bookkeeper. In 1978 they retired. After church on Sundays, they spent Sunday-Wednesday up near Julian at the cabin lovingly called Rether’s Retreat. They enjoyed long walks together in the mountains with their dog in the beauty of God’s Creation. Bob passed away in 1991. . In 2003, Louise sold the family home and moved to La Vida Real, a retirement home in Rancho San Diego, where she lived for 13 years. Her dear friend Forrest, was a wonderful, thoughtful, caring friend, driving her to Bible classes, Concordia Club, doing crossword puzzles, watching Padres games together, and holding hands for over 22 years. Louise will be remembered for her willingness to help others, her generosity, love for her family of 3 daughters, Sherry, Bonnie and Linda, 3 son-in-laws, Danny, Don and Tim. 11 grandchildren- Julie, Bonnie, Scott, Tim, Matt, Becky, Paul, Neal, Leah, Ryan and Josh. 26 great grand children and 9 great-great grandchildren. Throughout her life on earth, she lived out her love for God, for His Word, and shared her love for Jesus with others. As difficult as it is to say goodbye to her on this earth, we know we will see her again in heaven. Louise lived 104 years on this earth, taught the 23rd Psalm to all her children, and loved the hymns and songs of the church. Let us join together in singing some of the hymns she loved most.

The family of Louise T. Rether created this Life Tributes page to make it easy to share your memories.

Send flowers to the Rether family.