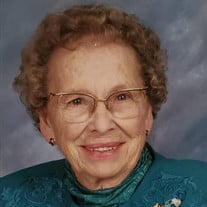 Lucy "Jo" Josey Anderson, 97, of National City, CA, passed away on December 13, 2021 peacefully, at home, with her daughter by her side. Lucy was born on January 18, 1924 in Faith, NC to the late Lillie Coble Josey and Lewis Lafayette Josey, and was preceded in death by her five brothers. Lucy was a World War II Veteran. She served proudly as a WAVE, CS2, in the US Navy from January 1944 – August 1952. She loved being stationed in Oahu, Hawaii for 16 months, and was on Waikiki Beach when WWII ended. She played basketball with the Naval Training Center San Diego, Women’s Basketball Team for three years, and was a Member of the 1947 Championship Team. She also played softball with the Naval Air Station/NTCSD Team. Lucy was married to the late Frank "Andy" C. Anderson, USN CWO-4 Retired, for over 36 years, and raised three children. Lucy and Andy enjoyed traveling around the United States and Canada for 16 years in their RV's. They visited family and friends, and always had a pup or two with them. Lucy felt fortunate that she was able to travel around the world to experience other cultures. Lucy was a faithful Member of the National City Baptist Church for 65 years, and served as the Nursery Attendant. She was a Deacon, a Member of the Missionary Society, Visitation and Church Committee, and was always happy to assist in the kitchen. Lucy was a Member of the City of National City Neighborhood Council and was involved with the City's Parks and Recreation Department while her children were growing up. She also volunteered driving patients to appointments for the American Cancer Society. Lucy enjoyed helping others and did what she could to give back, as she felt she had lived a blessed life. Lucy is survived by her children, Larry F. Anderson (Ana) of Poway, CA; Kathy J. Anderson of Irvine, CA; Charles D. Anderson (Candy) of Arlington, TX; grandchildren: Gena St. Louis, Stacie Anderson, Randy Anderson, and five great-grandchildren. Visitation: January 20, 2022 from 5:00 – 9:00 p.m. at Greenwood Memorial Park, Salli Lynn Chapel, 4300 Imperial Avenue, San Diego, CA 92113 Memorial Service: January 21, 2022 at 11:00 a.m. at Greenwood Memorial Park, Salli Lynn Chapel Interment with Military Honors: January 21, 2022 at 12:30 p.m. at Greenwood Memorial Park, Whispering Pines

Lucy "Jo" Josey Anderson, 97, of National City, CA, passed away on December 13, 2021 peacefully, at home, with her daughter by her side. Lucy was born on January 18, 1924 in Faith, NC to the late Lillie Coble Josey and Lewis Lafayette Josey,... View Obituary & Service Information

The family of Lucy Anderson created this Life Tributes page to make it easy to share your memories.

Send flowers to the Anderson family.