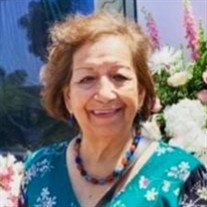 María Jesús “Chita” García, age 80, was called home with our Lord on November 21, 2021, 7 weeks after the passing of her beloved husband, Ramón Cruz García. In San Diego by her side were her daughters Silvia and Alicia, son-in-law David, granddaughter Adelina, and pet dog Frida. In María’s final weeks, with support of VITAS Hospice, her daughters fulfilled her wishes to be with family and was surrounded by devoted hands in prayer, massages, laughter, hugs, and visits.` She is survived by her two daughters, son-in-law, a granddaughter, brothers- Jesús José and Gilberto, nieces, nephews and extended family. She is preceded in death by her parents: Jesús and Salud Espinoza de Ávila; and siblings: Refugio, Julia, Miguel, Carlos, Reymundo, Baltazar and Juan. Born in Saucillo, Chihuahua, México, she is the youngest girl of 10 children and studied until 6th grade. She was raised in Cuidad Juárez amongst her brothers, Miguel, Reymundo, Baltazar, Jesús José, and Gilberto and begrudgingly ironed baskets full of their clothes. In exchange, they ensured she had shoes, clothes, makeup and the petticoats to poof out her flare skirts to wear to “tardeadas.” On weekends she crossed the border to El Paso, Texas to be with her sister Julia, brother-in-law Aurelio and her nephew José Luis. In her 20’s, Chita worked as a receptionist and retouched photos at Fotografía González. Her boyfriend, Ramón, would phone her at work. The nearest telephone to her home was at the bottom of the hill. María accepted Ramon’s hand in marriage in March 1965 after dating in Cuidad Juárez and writing letters while he was in California. María met Ramon’s family for the first time in Los Ángeles. Temporarily living in Watts and Venice, they raised their daughters in Culver City. In 1980 they moved to San Diego for 31 years. For 10 years, María and Ramón lived in Murrieta, California with daughter, Alicia and doggie-Frida. María’s final 7 weeks were spent at her daughter Silvia’s home in San Diego. María’s hands were always busy working. She purchased an industrial sewing machine to sew piece work of clothes after walking her daughters to school. Nightly she worked molding bra cups at a hot-pressing machine. Nevertheless, her hands enthusiastically cut and sewed preschool graduation caps and gowns, costumes, communion dresses, and matching clothes for her daughters, along with dresses and aprons for her elderly mom in Cuidad Juárez. In San Diego her hands rapidly seamed coats for Oscar de la Renta, Ralph Lauren and jackets for the 1984 Los Angeles Summer Olympics. Her son-in-law, David, volunteered in these Olympics and wore a jacket made by the same company where María worked. In the 90’s María raised her hand for her U.S Citizenship oath. Floral design classes taught her hands to create eye-catching arrangements. Her fingers strung beads into beautiful jewelry. Her hands chopped and mixed ingredients for delicious tamales, menudo, and tacos. Recipes which were handed down to Silvia, Alicia and Adelina. María embraced friends while lending a hand at work and church. She met life-long friend, Comadre Lydia in Culver City through Head Start. Comadres Concha and Socorro’s friendships blossomed through San Diego Movimiento Familiar Christiano. She and Ramón served in the church and were happy among friends. María, as her husband, assisted in serving the Eucharist on Sundays at mass. María came from and married into a large extended family. Known as Chita to both sides of the family, she shared laughter and tears through the years at meals, travel, weddings and funerals. She wisely counseled her daughters on handling life’s situations, including the unexpected. She crafted unique decorations to celebrate their milestones. She delighted making gifts for her granddaughter and conversing with her in Spanish. María’and her “güero”, soul mate, husband- Ramón, beautifully graced dance floors hand in hand. Hand in hand they took care of each other. Oh, gracious God, thank you for gifting María with her hands to show us the immense love You have for us all!

María Jesús &#8220;Chita&#8221; García, age 80, was called home with our Lord on November 21, 2021, 7 weeks after the passing of her beloved husband, Ramón Cruz García. In San Diego by her side were her daughters Silvia and Alicia, son-in-law... View Obituary & Service Information

The family of Maria Jesus Garcia created this Life Tributes page to make it easy to share your memories.

Send flowers to the Garcia family.