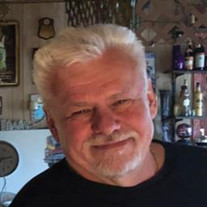 Mark Nowakowski November 30, 1957 -- January 24, 2022 His charisma was undeniable, his presence filled the room, his impact on the hearts he touched will forever be felt. Mark immigrated to the United States from Krakow, Poland in his teenage years. Mark graduated from Chicago’s Holy Trinity High School in 1975, and it was in Chicago where Mark met the best friends who would help shape his life, and follow his dream. In the land of opportunity, the world was his oyster. Mark set the goal to pave his own path, be his own boss, and not let anything stand in his way. He was ambitious, talented, and determined. In 1978, he chased the sunshine to San Diego in a 1977 Chevy Monte Carlo. A natural born mechanic, there wasn’t a machine he couldn’t repair, or a problem he couldn’t fix. His love for muscle cars became a lifelong hobby. One of his happy places was beneath the hood of a car, with tools in hand, hearing the engine roar to life. His entrepreneurial spirit led to quick success as a business owner. Soon after he arrived in San Diego, his grandparents and many of his friends from Chicago began to follow until they all started families, businesses, and success on the West coast. Mark frequently enjoyed cruising on a motorcycle, taking in the scenic views of California. He would often travel back to Chicago to visit his sister, mom, and dad for the holidays, and to stock up on the Polish food he loved. Through the years his family grew in San Diego. First born was Annette in 1985 followed by her brother Mark in 2001. Together they enjoyed racing on jet skis on the Colorado River. Both his son and daughter were at Marks’ side as he passed. We will always be reminded of Mark’s resilient optimism, his boisterous laugh and big, rosy-cheeked smile in the faces of his grandsons Anton and Leon Nowakowski. He also leaves behind children Annette Nowakowski, Mark Demerath, his sister Diane Znamierowski and his dad Richard Znamierowski. He was preceded in death by his mother Ala Znamierowski and her parents who helped raise Mark, Aniela and Kazimierz Grabowski. Funeral mass begins at Mission Basilica San Diego de Alcala at 11:30 am, followed by interment at Greenwood Memorial Park at 1pm, Saturday, February, 19, 2022.

Mark Nowakowski November 30, 1957 -- January 24, 2022 His charisma was undeniable, his presence filled the room, his impact on the hearts he touched will forever be felt. Mark immigrated to the United States from Krakow, Poland in his teenage... View Obituary & Service Information

The family of Mark Andy Nowakowski created this Life Tributes page to make it easy to share your memories.

Send flowers to the Nowakowski family.