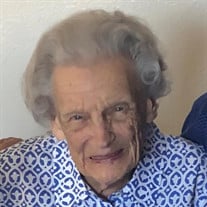 Mary Lee Caldwell Anderson passed away peacefully on September 8 in San Diego at the age of 97. Born in San Diego on July 5, 1924, she was the oldest child of Blanche Reynolds Caldwell of Costa Mesa and Hendrix K. “Jack” Caldwell of Benton, Arkansas. Mrs. Anderson graduated in 1947 from San Diego State College with a major in English and a minor in French. While an undergraduate, she was a member of Le Cercle Français, the Wesley Club, Alpha Mu Gamma, the national foreign language honor society, and Kappa Delta Pi, the international honor society in education. She remained an active member of the Delta Kappa Gamma Society for women in education. Mrs. Anderson was a lifetime member of First United Methodist Church in San Diego and until her early 90s continued to attend services, parking at the bottom of the hill so she could enjoy the walk uphill. She was a longstanding member of United Methodist Women. In 1950, she received an M.A. in English Literature from Syracuse University with a thesis on the Welsh metaphysical poet, Henry Vaughan. Returning to San Diego, she taught English at Woodrow Wilson Junior High and then at Crawford High School for over thirty years. On Aug. 21, 1963, Mary Lee Caldwell married her longtime piano teacher, Harry Lancelot Anderson (1910-90), an internationally recognized bibliographer of piano recordings. Among their shared pursuits was prowling book and record stores in search of rarities. Their devotion to the arts was only surpassed by their devotion to their cats, whom they adopted as strays and named after pianists. Immediate survivors include Mrs. Anderson’s sister, Ellen Komor, of San Diego, nieces Valerie Komor of New York City and Monica Lamoure of Versailles, France, and nephews Jeremy Caldwell of San Diego and Robert Caldwell of Hanover, N.H.

Mary Lee Caldwell Anderson passed away peacefully on September 8 in San Diego at the age of 97. Born in San Diego on July 5, 1924, she was the oldest child of Blanche Reynolds Caldwell of Costa Mesa and Hendrix K. &#8220;Jack&#8221; Caldwell... View Obituary & Service Information

The family of Mary Lee Anderson created this Life Tributes page to make it easy to share your memories.

Send flowers to the Anderson family.