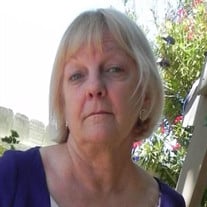 Mary Louise Svec Sonksen, the oldest of Harry and Edna Svec’s nine children, passed away on April 26, 2022 in San Diego, CA. She was 77 and succumbed to cancer. Born January 27, 1945 in Ames, IA, she grew up there, graduating from Ames High School in 1963. After 1965, as a Navy wife, she lived in Yokuska, Japan, the San Francisco Bay area and eventually settled happily in San Diego. She took a detour back to Ames and Iowa State University to complete her BA degree in Interior Design in 1977 and returned to San Diego where she was a practicing designer right up to the end of her life. Mary was talented, capable and fiercely independent. She learned the practical skills required to maintain a home and car, ran tools, fixed things and could produce complex, stunning garments and accessories on her sewing machine. Her creativity could be seen in her home and the homes of others, in her carefully tended gardens and in the detailed handwork that went into clothing and decorative objects. Her extended family cherishes the exquisite handmade Christmas ornaments she made every year, often starting months before the holiday to complete them on time. She was an entrepreneur. Several Etsy shops featured sturdy baby clothes, masks during the pandemic and a line of exotic purses made from scrap upholstery fabrics and abandoned fur coats, allowing beautiful materials not to be wasted. When her son became interested in Renaissance-style re-enactments, she educated herself on fashions from that era and using patterns based on period garments, sewed a museum-worthy wardrobe. And, when the missing piece of authenticity for those outfits turned out to be period footwear, she established a company to fill the gap, created the designs and worked with fine Mexican shoemakers. This was common for Mary. When she saw a need and had the know-how to fulfill it, she often did. Family and friends experienced that, too; if she could help, she would. Mary was a voracious reader and news hound and closely followed, and had strong opinions on, political and social developments, which she often shared with like-minded others. She was a no-nonsense person who had little use for the faint of heart and did not suffer fools. Marriage was not a lasting aspect of her life, and on her own, she raised three capable children – Andre Sonksen (Terri Lewis), Yvonne Sonksen (Eric Otenburg) and Heather (Alfonso) Erdmann. She is survived by her children, a granddaughter, all eight of her siblings, 15 nieces/nephews and 15 grandnieces/nephews. Her parents passed in 2006 and 2013. While not a religious person, Mary maintained a spiritual life and believed there was “another side” where we would meet again. Joy Harjo, a Native American poet, wrote: "I can hear the sizzle of newborn stars and know anything of meaning, of the fierce magic emerging here. I am witness to flexible eternity, the evolving past, and I know we will live forever as dust or breath in the face of stars, in the shifting pattern of winds." To Mary: now freed from physical restraints, travel the universe and enjoy the spectacle! Donations in her memory may be made to Compassion and Choices (https://compassionandchoices.org) or a local animal rescue shelter, or consider adopting a rescue pet of your own.

Mary Louise Svec Sonksen, the oldest of Harry and Edna Svec&#8217;s nine children, passed away on April 26, 2022 in San Diego, CA. She was 77 and succumbed to cancer. Born January 27, 1945 in Ames, IA, she grew up there, graduating from Ames... View Obituary & Service Information

The family of Mary Louise Svec Sonksen created this Life Tributes page to make it easy to share your memories.