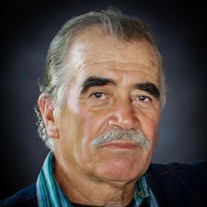 Melecio S. Guzman, beloved Husband, Father, Grandfather and great Grandfather, passed away peacefully on April 9, 2021 at the age of 85. Melecio lived an extraordinary life and will be missed by his family and friends. He was born on February 12, 1936 in San Miguel El Alto, Jalisco, Mexico to Albino and Rosa Maria Guzman. Melecio had eleven siblings and three half siblings. Melecio’s twin brother passed away when he was two years old. Melecio, at the age of 16, left home for the United States to make a better life for himself as well as to help his family. Melecio went back and forth from the U.S. to Mexico until he met and married his beloved wife, Rosa L. Guzman, at the age of 28. They were happily married for 50 years until Rosa passed away in 2015. Together they raised their six children in San Diego, CA. Melecio had many different jobs over the years but his most rewarding and fondest job was working at Techbilt Inc. for over 30 years. The most important things to Melecio were his family, faith and hard work. He enjoyed spending time with his family as well as working on his landscaping. Melecio is survived by his six children, Ernesto, Leticia, Raul, Maribel, Melecio Jr. and Alejandro. He is also survived by 11 grandchildren and 1 great grandson, his brothers Jesus and Anselmo and many nieces and nephews. He loved his family very much. He was predeceased by his beloved wife Rosa and daughter Maria. Melecio was a wonderful husband, father, grandfather, great grandfather, brother, uncle, and friend. He was immensely proud of his children and grandchildren. He is deeply loved and will be dearly missed. Services will be held at The Garden Chapel at Greenwood Mortuary on Thursday, May 6, 2021. The Viewing will be held from 12:00 PM to 2:00 PM, Prayer and Mass from 2:00 PM to 3:00 PM and Entombment at 3:00 PM.

Melecio S. Guzman, beloved Husband, Father, Grandfather and great Grandfather, passed away peacefully on April 9, 2021 at the age of 85. Melecio lived an extraordinary life and will be missed by his family and friends. He was born on February... View Obituary & Service Information

The family of Melecio S. Guzman created this Life Tributes page to make it easy to share your memories.

Send flowers to the Guzman family.