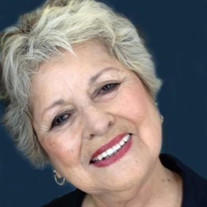 Norma Reiland was born on March 23, 1943, in San Diego County where she lived until 2021. She was the firstborn of three children to Louis and Tilly Velasquez. Norma attended our Lady of perpetual help Catholic school from kindergarten all the way till 12th grade, earning her high school diploma. Shortly after graduating she received her cosmetology license and began her career as a hairstylist for many years until she switched to the food services industry. She had many different jobs in food services working her way from the bottom all the way to pastry cook where she worked for 20+ years. She retired in the food service industry in 1998. After she retired, she was very involved in her grandchildren's life. She was a room mother and took her grandkids to almost every field trip they had as a chaperone. Once her grandkids were grown and in high school, she picked up some part-time work here and there as she could. Norma really enjoyed working. She fully retired in 2016 from Anderson plumbing heating and air where she was a permit specialist. Norma married her beloved husband Terry Reiland on November 30, 1983. They have two children. A woman of God, she was a strong believer in her faith and practiced in her own ways. Norma was loved by everyone, and she adored them just as much. She was such a strong woman with the biggest smile. She was kind-hearted, funny, and beautiful inside and out. Norma loved her family so much. The birth of her grandchildren and her great grandchildren where some of her proudest moments and watching her son and daughter become successful has been her greatest accomplishment. Norma loved to garden, bake, and spend time with her family. She enjoyed watching her favorite tv shows and listening to her favorite music. She loved Neil Diamond, The Carpenters, Fleetwood Mac, Freddy Fender and so many more. Norma is survived by her Husband Terry Reiland. Children Melissa Cherico and Bryan Rominger and daughter-in-law Mary-Jean Anderson. Brother Ivan Velasquez and sister-in-law Wilma Velasquez. Grandchildren Daniel Cherico and Sarah Kumar Ashley Cherico and Matt Krohn. Great grandchildren Liam Cherico, Carolena Cherico and Sophia Krohn. Nephew Gunnar Velasquez and niece Kiira Velasquez great nieces McKenna and Madison Velasquez. Nephew Ty Velasquez. Nieces Patricia Verzola and Skye Jollie. Niece and nephew Tanja and Tony Salle great nephews Hunter and Charlie Sallee. Niece Teenja Stanich Velazquez and great nephew Robert stanich. Step grandchildren Kyle and Addrienne Anderson. Kelly Anderson. Step great grandchildren- Riley, Rocky (Geren) and Carson Anderson. Giovanna and Gianni Fusco. Norma will always be in our hearts. We love you. Until we meet again.

Norma Reiland was born on March 23, 1943, in San Diego County where she lived until 2021. She was the firstborn of three children to Louis and Tilly Velasquez. Norma attended our Lady of perpetual help Catholic school from kindergarten all the... View Obituary & Service Information

The family of Norma Louise Reiland created this Life Tributes page to make it easy to share your memories.

Send flowers to the Reiland family.