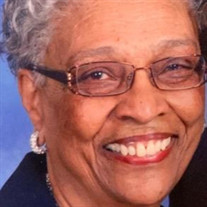 Odessa Dean Rentie Born September 6, 1935, last smile December 5, 2021 Odessa was the youngest child of eight children born to Andrew and Millie Rutherford Jackson in Pledger, Texas. O.D. as she was called then, was educated in the Pledger... View Obituary & Service Information

The family of Odessa D. Rentie created this Life Tributes page to make it easy to share your memories.

Send flowers to the Rentie family.