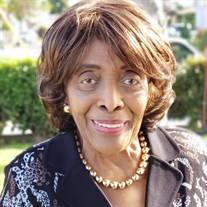 Pearlie Mae Gadson, was born June 26, 1934 in Columbia, MS to her loving parents Homer and Eula Blackman. In 1944, her family relocated to San Diego, CA. Pearlie attended school in San Diego and graduated from Point Loma High School. In 1953, she married George F. Cunningham, Sr., two children were born to this union, George F. Cunningham, Jr. and Inna K. Cunningham. On May 22, 1970, she married Vernon H. Gadson, who was the love of her life. To this union, her youngest son Spencer E. Gadson was born. They were happily married for 51 years. In 1956, Pearlie began her career with the Department of Defense – Navy, specifically in the Inventory Management Branch. She had excellent leadership ability, was loyal, dedicated to her craft and the people she worked with. Pearlie had the ability to get things done while meeting all time constraints. During her career, she received many awards for her knowledgeable leadership in material management. She held several positions and retired in 1990 as Supply Department Supervisor. Pearlie loved the Lord and accepted Christ at an early age at Morning Star Baptist Church in Laurel, MS. As a member of Mt. Zion Missionary Baptist Church over 75 years she served as an usher, a choir member, a deaconess and over 35 years as the Church Secretary. She loved spending time with her family, traveling, reading, fishing and shopping. She had the sweetest spirit, always loving and generous. Our classy mom was often referred to as "the sophisticated lady". Thursday, January 6, 2022 Pearlie made her transition from this life to be with our heavenly father. She has now reunited with those who have preceded her in death, her father and mother Homer and Eula Blackman, her son George F. Cunningham Jr. and her only sibling, her sister Alma Kate Rucker. She leaves to mourn her passing: her husband Vernon Gadson; 2-children Inna Lomack (Herbert), Spencer Gadson (Challe'); 6-grandchildren Kiara Dennard (Terray), Lorenzo Lomack, Spencer Woods (Amber), Daivon Gadson (Samantha), Zariah Gadson, Syera Gadson; 5-great-grandchildren, Mehki Dennard, Naomi Lomack, Makayla Lomack, Alina Woods, Ezekiel Woods. Her niece, Elaine Cousin and first cousin, Willie Edwards. Her marriage to Vernon gave her 5-step-children Vernon Gadson Jr., Daniel Gadson, Michele Newton, Angela King (Anthony), Deidre Gadson-Walker and a host of other relatives and friends.

Send flowers to the Gadson family.