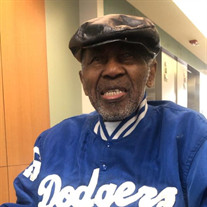 Pharisee Brooks, Jr. was a hardworking man who was born and raised on a farm with his 11 siblings in Kaufman, Texas. Named after his father Pharisee, he was the 2nd son and 2nd child of Pharisee and Clara Brooks. He played football and baseball as a young boy between all the chores required to maintain a farm. Perhaps he finished chores early one day to meet his future wife Ruth Hazel Choyce, who resided on a neighboring farm. They both attended Pyle High School in Kaufman Texas. At 22 years old, Pharisee enlisted in the United States Army on February 12th, 1951, just less than a year after the Korean War had begun and 8 months after his first child was born. He was an ammunition foreman. He was stationed at a Fort in Seattle, Washington until his honorable discharge in 1953. He and Ruth along with their son, moved to San Diego. On June 3, 1953, he secured employment with the San Diego County and remained there until his retirement 36 years later on June 23, 1989. In the 60’s, he took on a part-time job at Montgomery Wards, as by this time, he had 4 additional mouths to feed when 4 little girls followed the birth of their son. The same little girls who continuously hid his cigars so he would stop smoking, and it worked. Pharisee was a proud gardener who would excitedly show off his backyard garden to anyone who could spare some time, and to those who couldn’t 😊. His collard greens, potatoes, carrots and other delights, were the highlight of his daily squats in his overalls and variety of bucket hats. He kept his front yard close to impeccable, never hired a gardener and his 2 front yard bushes were manicured to perfection. He could shine his shoes with black shoe polish from a small round aluminum container using an old sock, so bright, that it would leave a blinding glare. His constant rubbing against the leather, with sheer determination to up the anti each time, was pure entertainment of endearment. However, his nightly routine to pluck ingrown face hairs was also a sight to see. He would contort his body on top of the bathroom counter until the first child, who dared to walk by, would be summoned to support his efforts. This required you to hold your breath for a while to get pass the smelly Magic shaving powder that was concocted in 1901. Pharisee had a unique vocabulary of words that were foreign to Webster’s dictionary. “Dat gummit” and “By golly” were used with frequency, and yet had no comparing synonym. Pharisee had a love for cars and would call out the year, make and model of cars as you rode next to him. His Studebaker he owned back in the 50’s or 60’s was a prized possession until it was sold. He became fond of trucks thereafter. Just about as much as he was fond at dining at the Barbecue Pit, Keith’s Restaurant and Hometown Buffet to corner a new acquaintance, where some would call victim, into talking politics. His big warm smile was contagious, so you had no idea he was reeling you in for an extended conversation. He also had a sweet tooth and a nightly affair with Rocky Road or Butter Pecan Ice Cream. Once the ice cream hit the spoon, there was certainty the clanking of his teeth would follow. Just about everything was loud with him. Snapping fingers to music sound like he was cracking nuts. And, because he eventually wore hearing aids, the volume of his voice increased as well. Pharisee was like the neighborhood dad. He would slowly drive by and speak to all the kids on the street. He was such a good father and a manly man. He would cook breakfast in the morning for his kids since his wife worked a graveyard shift. When his wife became ill in early 2000, he cooked all her breakfast meals as well, even long after a caregiver was hired. Pharisee was spiritual, but not religious. Today’s celebration is a consideration of this. Pharisee’s passing on May 11th, 2022 was preceded by his wife (Ruth Hazel), daughters Deaster (Dexter L.) Prince & Korenda Brooks, Parents (Pharisee and Clara) Brooks, brothers Sylvester/SV (Katherine-deceased) Brooks, Lenzy Charles/LC Brooks and sisters Curley (Johnny-deceased), Ollie Mae (Travis-deceased) Johnson, Druella (Richard-deceased) Talbert. Cherishing His memories are his daughters Brenda Brooks, Donna (Dee) Jean Brooks and son Ray Neil Brooks, sisters Eula Brooks, Virginia (Thomas-deceased) Clemons, Lyvonne (Charles-deceased) Henderson, Alberta (Lawrence-deceased) Gibson, Vera (Hallman-deceased) Shaw, Vital Marie (Charles) Boyce, 1 granddaughter, 4 grandsons and 4 great grandchildren.

Pharisee Brooks, Jr. was a hardworking man who was born and raised on a farm with his 11 siblings in Kaufman, Texas. Named after his father Pharisee, he was the 2nd son and 2nd child of Pharisee and Clara Brooks. He played football and baseball... View Obituary & Service Information

The family of Pharisee Brooks Jr created this Life Tributes page to make it easy to share your memories.

Pharisee Brooks, Jr. was a hardworking man who was born and raised...

Send flowers to the Brooks family.