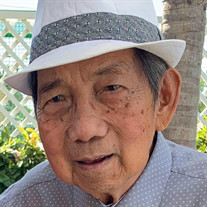 Our dad, Ricardo Manday Fernandez, aka “Bucks,” passed away peacefully on Tuesday, March 29, 2022, just before noon. He was a kind, loving and generous man who dedicated himself to his wife (our mom), Victoria Magpantay Fernandez and his four sons: Edwin (Bong), Ricardo Jr. (Butch), Greg and Victor. Rick was born in Pasay City, Philippines, on January 16, 1940. He graduated from The University of the Philippines. Later, Dad would become a well-liked social sciences and history professor at Feati University. While attending Arellano University to pursue his master’s degree, he met our mom Victoria, a fellow classmate. This was the beginning of their love story. In 1969, he moved to National City, CA, to start a new life in a new Country. This new life almost didn’t happen due to a near-death car accident on New Year’s Eve. He was struck by a drunk driver and was in a coma for 16 days. Miraculously, he would awaken from the coma on his 30th birthday to find our mom by his side. They shared a special bond which led them to marry on June 2, 1970. Although Rick was an accomplished professor in the Philippines, he did not continue the same career path in America. His first job was at Sun Ray Beauty Supply as a warehouse stock clerk. He gradually worked his way up to warehouse supervisor and eventually became a beauty supply distributor. He drove throughout San Diego County, earning his reputation as the self-proclaimed “Best Salesman in Town, baby." Dad was very successful as a salesman and came home with pockets full of money. Hence the name “Bucks” was born. Eventually, he would have his own business in Chula Vista, CA, named R & V Beauty Supply. Unfortunately, due to complications of diabetes, his thriving career was cut short, and he was forced into early retirement. Rick enjoyed the rest of his life doing the things he loved: being with family, eating his favorite foods and especially smoking his cigarettes. He also enjoyed reading, watching the news, and most famously, creating his original jokes. Dad loved to make people laugh. Despite being a man of few words, he had a very fun and captivating sense of humor which we all loved most about him. He will be missed dearly by his family and all who had the opportunity to know him. WE LOVE YOU, DAD. REST IN HEAVENLY PEACE, BUCKS. Thank you abundantly for your prayers and support.

Our dad, Ricardo Manday Fernandez, aka &#8220;Bucks,&#8221; passed away peacefully on Tuesday, March 29, 2022, just before noon. He was a kind, loving and generous man who dedicated himself to his wife (our mom), Victoria Magpantay Fernandez... View Obituary & Service Information

The family of Ricardo Manday Fernandez created this Life Tributes page to make it easy to share your memories.

Our dad, Ricardo Manday Fernandez, aka “Bucks,” passed away peacefully...

Send flowers to the Fernandez family.