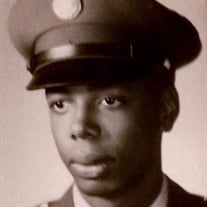 Richard was born Jan 8, 1941, in Wright city Oklahoma to parent’s Celus Davis and Learlean Davis who preceded him in death. He had 5 sisters and 4 brother. His family moved to San Diego California in the early 1940’s where he attended elementary and high school. Richard was drafted into the United States Army on Oct 1960 to Oct 1962 during the Vietnam war where he served most of his time in Germany, afterwards he was in the reserves until he was honorably discharged in 1966. When he got out of the service, he and the love of his life Barbara Davis were married that same year in San Francisco. Richard later went to night school at San Diego City College and received his GED, after that he started working as a Civil Service employee at the post office. Richard was a mail carrier for 34 years until he retired. He enjoyed placing bets on horse racing, playing cards and dominoes he was good with numbers. He was also the go-to person for advice. His words of advice always sounded like he had so much knowledge and wisdom. Richard departed this life on September 3rd, 2021, to cancer. He leaves to cherish his memory: his wife Barbara Davis, his sons Frankie Davis, Michael Davis and Daughter Elaine Davis-Houston, daughter Jade Davis is (deceased); Grandchildren Candace, Mercedes, Portia, Randy, Jordan, Tijera, and Qiana; nieces, nephews; and a host of other relatives and friends. The Lord's Prayer Our Father, who art in heaven, hallowed be thy Name, thy kingdom come, thy will be done, on earth as it is in heaven. Give us this day our daily bread. And forgive us our trespasses, as we forgive those who trespass against us. And lead us not into temptation but deliver us from evil.  For thine is the kingdom, and the power, and the glory, for ever and ever. Amen

Richard was born Jan 8, 1941, in Wright city Oklahoma to parent&#8217;s Celus Davis and Learlean Davis who preceded him in death. He had 5 sisters and 4 brother. His family moved to San Diego California in the early 1940&#8217;s where he attended... View Obituary & Service Information

The family of Richard L. Davis created this Life Tributes page to make it easy to share your memories.

Send flowers to the Davis family.