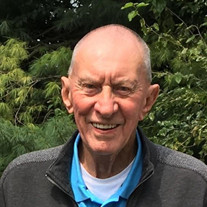 Richard Joseph “Bud / Ace” Ehnow, 91, passed away on December 19, 2021, at home in Coronado, California surrounded by his loving family. He was born on November 26, 1930 in Philadelphia, Pennsylvania to Richard and Catherine Ehnow. Bud grew up in Glenside and Flourtown, Pennsylvania and graduated from St. Joseph’s Preparatory High School (Phila., Pa) in 1949. After high school, he joined the United States Air Force where he served his country during the Korean War. He worked for the Reading Railroad (later Conrail) as a Marketing Analyst for 39 years. Bud married Elizabeth “Betty” Weikel in 1961 and they were happily married for 60 years. They spent the majority of their married life in Oreland, Pa. where Bud coached baseball, his second love, at various levels. Bud was a man of faith who loved his family and friends. He enjoyed humor, Major League Baseball, and Notre Dame football. He is survived by his loving wife Betty, his sons Rich (Patty) Ehnow of Downingtown, Pa., and Bob (Colette) Ehnow of Coronado; his brother Robert (Marian) Ehnow of Philadelphia, Pa.; grandchildren Emily, Brian, Brendan, Caitlin, Kelly, and Eric; great-grandchildren Kennedy, Colbie and Carsyn; as well as many nieces and nephews and other relatives he loved dearly. Bud was preceded in death by his parents Richard and Catherine and his brother Frederick. A memorial mass will be held at Sacred Heart Catholic Church in Coronado, Ca. on Tuesday, December 28, 2021 at 11:00am. The mass will be livestreamed at www.sacredheartcor.org In lieu of flowers the family requests memorial donations be made to Sacred Heart Parish School at membership.faithdirect.net/givenow/CA886 As some people journey through life, they leave footprints of kindness and love, courage and compassion, joy and faith. Even when they’re gone, the trail they’ve left behind continues to inspire us.

Richard Joseph &#8220;Bud / Ace&#8221; Ehnow, 91, passed away on December 19, 2021, at home in Coronado, California surrounded by his loving family. He was born on November 26, 1930 in Philadelphia, Pennsylvania to Richard and Catherine Ehnow.... View Obituary & Service Information

The family of Richard Joseph Ehnow created this Life Tributes page to make it easy to share your memories.

Send flowers to the Ehnow family.