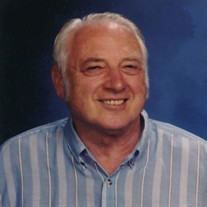 National Guard, Fleet Reserve, The Elks Club, American Legion, Forbpo, Boy Scouts of America (Cub Master) Born July 9th, 1935 in Huron, SD. He was a farm boy. Lived in Yale, SD, went to the Foote Family School, and then to Yale School. He was top in his class of 13. He was in the Army for three years. Married in Aberdeen Proving Grounds, Maryland on September 21st, 1956. He graduated from school top in his class and was sent to Alaska for deployment. Our first child Charlene was born in the territory of Alaska. From there he went home to Huron, SD. He worked at a soda bottling company, Ellwein. My father was a conductor on the Chicago and Northwestern Railroad. My dad was a great storyteller, so he decided to sign up and work for them as well as a brakeman. No future there, so he began checking the post office for jobs. Found one in Pierre, SD working in the bridge department. By then we had three more children - Richard, Coreen, and Michael. Didn't like the politics at the state so he went to work at a Mobile station. Winters he would drive petroleum trucks to surrounding farms. Didn't want to work the miserable cold winters so started taking more tests. He was accepted by the United States Border Patrol. We were investigated by the FBI. Before we knew it, he was on his way to San Diego. Got uniforms, indoctrinated, and was sent to Brownsville, Texas to attend school. Graduated and became a United States Border Patrol Officer at the San Diego station. Worked twenty and a half years at the sector office in San Ysidro. Helped his fellow officers in binocular repair. He became a Border Patrol supervisor. Following retirement, he went to work for the Chula Vista elementary school district and the Lemon Grove school district as well. Then he retired again. Then he went to work for the 3 Day Blinds and eventually he decided that he had enough and retired permanently - he thought. My son and I had a business, and we rented a large store in downtown Chula Vista called The Downtown Plaza. We had a grocery store, a gift shop, a coffee shop - which Richard ran, and his wife ran the deli and ice cream store. They finally all retired in 2012. After retirement, we traveled around the United States until 2019. He is predeceased by his father Burr Foote, mother Dorline DeLano, stepfather, two brothers and a sister. He leaves behind, his wife: Marvel DeNolf Foote, of 65 years; sons Michael and Richard; two daughters: Charlene and Coreen; six grandchildren; eight great-grandchildren and one great-great-grandchild.

The family of Richard George Foote created this Life Tributes page to make it easy to share your memories.

Send flowers to the Foote family.