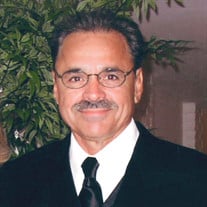 Robert “Bob” Barrios, Jr. passed away on January 10, 2022, at Sharp Memorial Hospital at the age of 75. He is survived by his wife of 52 years, Olga, his 3 children, Bobby, Jennifer, & Matt, along with his 2 siblings, Dollie and Rex. Bob was a proud Papa to his 4 grandchildren, Santino, Brando, Isabella, & Ava. Bob leaves a strong legacy founded in his passions of military service, career, and family. Bob was a proud retired U.S. service member. He served in the Army, Infantry division, and was a Vietnam veteran where he guided pilots to their targeted coordinates. Bob could often be found with an American flag pin on his suit lapel. After his military service ended, Bob became a Radio DJ, where his love for music grew. Bob loved to listen to many types of musical artists, and enjoyed countless live concerts. Never to be idol, Bob pursued becoming his own boss, building his empire from a juice delivery route to a flourishing distribution company and several fast food restaurants. Bob’s greatest happiness could be witnessed any time he spent with his family and close friends. Whether at his epic Chargers football tailgates, many vacations around the world, or attending any sporting activity of his grandchildren, Bob relished being with the people he loved. Bob will be sorely missed, as his larger-than-life legacy leaves a big void for those left behind.

The family of Robert Hughes Barrios Jr created this Life Tributes page to make it easy to share your memories.

Send flowers to the Barrios family.