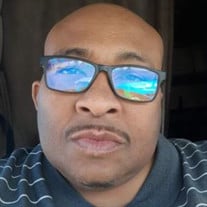 The DASH (-) of Robert's Life Robert Lee Esters III, Dash of life began on January 28, 1977 in San Diego, California born to Robert Lee Esters Jr and Barbara Joyce Flynt. Robert was an only child for many years and was so loved by his family. Born at Grossmont Hospital weighing 5.5 lbs his father gave him the nickname "Squirt" which is what he was affectionately called by family and friends. His grandfather, Robert Lee, provided a second nickname "Captain". Robert attended San Diego County schools. At the tender age of nine Robert moved with his Mother to Atlanta, GA and completed his formal education at Houston County Public School System, enjoying social activities, and church life. As Robert grew up in Georgia, so did his friends list from San Diego to Atlanta. He was now of age and moved back to San Diego working jobs such as an employee of The San Diego Zoo and other various jobs. Robert eventually moved to Colorado which further expanded his friend list from near and far. Robert's life was filled with many days of happiness, sadness, gratefulness, faith and some unfulfilled dreams but he always kept his head up and loved family and life. One of Robert's joyful moments occurred in 1993. I won a car from a water park drawing in Atlanta. The drawing was held live at one of the Atlanta Braves home games and all contestants could bring one guest; Yes, all Robert. One by one the contestants tried their key. With two contestants remaining it was my turn and "Oh what a feeling" My eyes turned to Robert and he knew he was the man of the day. We had A1 lunch, attended the game in the skybox, and they drove the car around inside the stadium and called us out as the Winners. I was so proud just to be with him to witness such joy. Other joys of life for Robert was the birth of his sisters and brother and when he realized truck driving was his peace. He worked several companies, first with CRST "The Gold" He loved the peace on the road and continued driving trucks even when his sickness began in 2018. Robert loved life and you can often hear him praise "HALLELUJAH". Preceding Robert in Final Farewells are his loving Grandparents, Andrew Leroy and Billie Jean Flynt; Robert Lee Sr. and Almeta Esters; Uncles, Alan Day, Russell, Ronnie and Ricky Esters; Aunts, Andrea and Valerie Flynt; Lulu Day and Pandora Esters; Cousins, Lachelle Esters (Brittany). Robert leaves behind his smile, laughter funny wit, cherishing and loving memories; his father, Robert Lee Esters Jr; San Diego, CA; his mother, Barbara Joyce Flynt and his stepfather, James Bolden; Perry, GA; sisters, Rayanna Jennings; Newport News, VA and Jamyra Bolden; Perry, GA, Brother, James Bolden; Perry, GA. Uncles, Darrell and Kevin Flynt; San Diego, CA, and Michael Flynt (Carmen) Phoenix, AZ. Aunts; Pamela Esters; San Diego, CA; Jacqueline Flynt-McMorris (Ralph); San Diego, CA; Denise Key; Pine Bluff, AR, and so so many cousins, nephews, nieces and friends. Robert was not blessed with any biological children but he had two special boys, Alex and Anthony Medina in his life. Robert greatly loved ALL of his family. Robert Lee Esters III, 44 years old, Dash (-) ended on Tuesday, April 13, 2021 in Sterling, Colorado. Robert now sees Jesus in his full glory!

The DASH (-) of Robert's Life Robert Lee Esters III, Dash of life began on January 28, 1977 in San Diego, California born to Robert Lee Esters Jr and Barbara Joyce Flynt. Robert was an only child for many years and was so loved by his family.... View Obituary & Service Information

The family of Robert Lee Esters III created this Life Tributes page to make it easy to share your memories.

Send flowers to the Esters family.