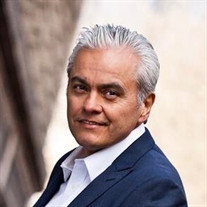 Robert Gutierrez Fuentes November 30, 1960 – October 22, 2021 Robert Gutierrez Fuentes passed away on October 22, 2021, at the age of 60 in Los Angeles, a city he loved and where he lived the best version of his life. Born in San Diego, California to Beatriz Gutierrez Ovalle and Baltazar Garcia Fuentes, Robert cherished his family above all else and often said, “I’m the luckiest man on earth!” He is survived by his beautiful wife, Tiffany, whom he adored; three children, Robert-Pierce, Zoe & Sofia who all inherited his quick wit; and two dogs that he pretended not to love named Gizmo & Paloma. Beyond being a loving father and husband, he was an Actor, Glazer, Safety Director, Union Advocate, Volunteer, and Mentor. Robert was passionate about acting. He trained at the American Conservatory Theatre in San Francisco, Groundlings in Los Angeles, and Jet City Improv in Seattle. He performed in comedy & improv, theater, commercials, television, and multiple films, culminating in his final performance in East of the Mountains directed by SJ Chiro. Known for his wit and versatility as an actor, he will be greatly missed on the stage and the big screen. Humor was in his heart even in the most precarious of situations. It was how he lived and invited others to live. As a Glazer, while hanging from a 30-story building, Robert was known to often look to the sky, get some sun on his face and turn to his fellow Glazer and say, “today is a good day to die”. Robert was a well-respected and hard-working Safety Director who was presented with the key to “Big Deal City.” A 15-inch iron key award was created by his friends and presented to him for his tireless efforts and success in making a big deal of absolutely everything. He was an effective advocate for labor unions and worker rights, volunteered for countless causes & organizations, and mentored many throughout his life. Robert enjoyed taking long walks and riding his Harley, affectionately named Ginger. He also promoted healthy living by participating in Ragnar running relay races. (Think relay adventure meets epic road trip to raise money for a worthy cause.) He helped his friends get in shape by holding weight loss competitions where money was always on the line. Robert also loved to ride for miles and miles on his bicycle. In 1997, he accomplished his longest bicycle ride of 380 miles from San Francisco to Los Angeles. Robert will be remembered for so many wonderful things, including a passionate love affair with tacos, good tequila, and pints of Rocky Road. His quick and clever humor, spirit for life, and heartfelt love of family, friends and community will always be appreciated and never forgotten.

The family of Robert G. Fuentes created this Life Tributes page to make it easy to share your memories.

Send flowers to the Fuentes family.